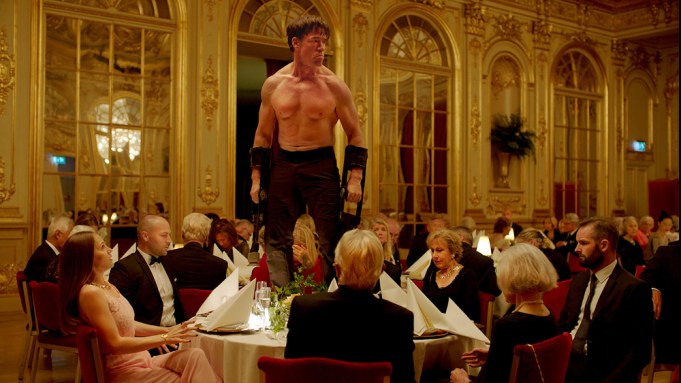 Chaos and the awkward aftermath of a sexual encounter are featured in Magnolia’s new trailer for Swedish drama “The Square,” which won the Palme d’Or at the Cannes Film Festival in May.

The footage focuses on “The Square,” a new neon installation aimed at evoking altruism, at a Swedish art museum.

“We need to present the art of today,” says the museum director, played by Claes Bang. “We as a museum must not be afraid to push boundaries.”

The exhibit evokes bad behavior by unruly patrons. “I’ll make chaos for you,” one teenager vows.

The trailer also includes an awkward exchange between Bang and Elisabeth Moss’ journalist character after a sexual fling.

“How often would you say you take women you don’t know very well and have sex with them?” she asks. “You know their names. So what’s my name?”

The film is directed by Ruben Ostlund, who also helmed 2014’s “Force Majeure.” Variety’s Owen Gleiberman gave the film a strong review at Cannes: “Ostlund creates suspense the old-fashioned way, setting up scenes that make the audience go: What in God’s name is going to happen next? But he also creates suspense in a newfangled way, turning the space between people into an alarming existential battleground.”

The movie is also screening at the Toronto International Film Festival. Magnolia is releasing “The Square” on Oct. 27 in the U.S.