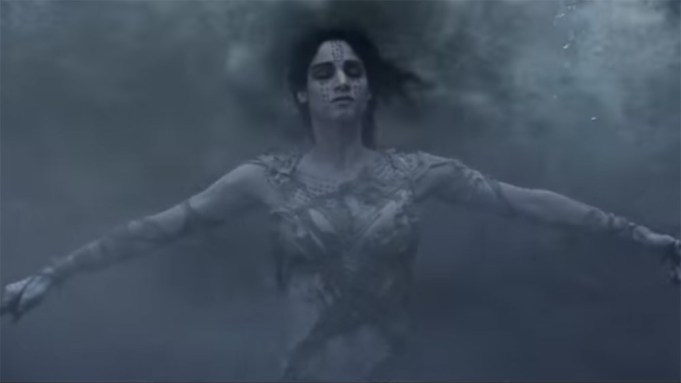 Don’t mess with an angry mummy.

Universal dropped the terrifying new trailer for its latest take on “The Mummy” on Sunday, which shows Sofia Boutella’s evil mummy, Ahmanet, on a quest to swallow the earth. But don’t worry — she won’t if Tom Cruise has anything to say about it.

Cruise’s Nick Morton unearths Ahmanet from her crypt, and, as seen in the first trailer, dies in a plane crash while trying to transport the mummy. However, he’s resurrected himself, and is joined by Annabelle Wallis’ Jenny Halsey and Jake Johnson’s Sgt. Vail on his quest to stop Ahmanet from destroying the world.

“She will not stop until she makes our world her own,” says Russell Crowe’s Dr. Jekyll of Ahmanet in the new footage.

The trailer debuted earlier this week at CinemaCon in Las Vegas, where stars revealed to theater owners that Cruise did 64 takes in zero gravity for the plane crash sequence.

“We jump off buildings … and Tom really does it all,” said Johnson. “My character dies. I almost died.”

“The Mummy” will hit theaters on June 9.