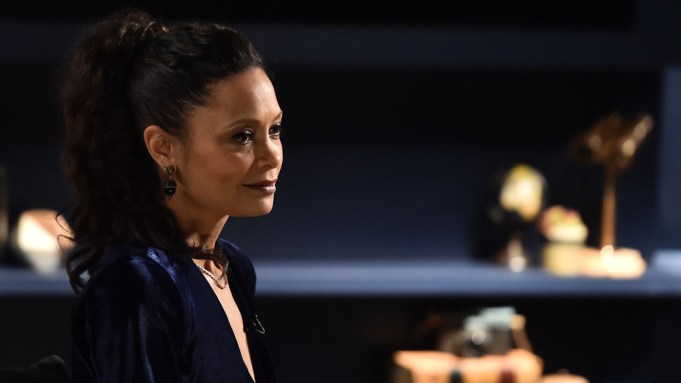 Thandie Newton got the call. You know, the call that made her 16-year-old daughter want to tell her friends about mom’s next movie.

That call was about Newton landing a part in the “Star Wars” Han Solo spinoff, set to hit theaters in 2018.

In an interview with Oprah Winfrey as part of Variety’s “Actors on Actors,” Newton discussed how she learned to let everything go to prepare for her next big role — and how she waited three weeks to find out she had gotten the gig.

Newton’s friend, casting director Nina Gold, had never cast her in anything over the span of their 20-year friendship. Then, Gold, who was casting the “Star Wars” franchise, called Newton to tell her about a part for the film.

“I just had these ideas of what it would be, you know, and it was completely different to everything I imagined and I’m so thrilled,” Newton said.

There has been little revealed about the still-untitled project — and Newton isn’t spilling a thing.

“I’ve signed a non-disclosure and can’t say a word, which is frustrating because you know me. I like to chat it up,” Newton said.

Between landing “Star Wars” and wrapping Season 1 of “Westworld,” Newton got a tattoo of the word “freedom” in her mother’s native language. She said the body art symbolized liberation from being tied to a role, adding, “I felt free, and it didn’t matter.”

“That’s how it comes,” Winfrey agreed.

“In that psychic space — hello — the galaxy opened and down came a shooting star,” Newton said.

And letting go, Newton said, is the one piece of advice she would have given to her younger self.

“To be part of a legacy like ‘Star Wars,’ it’s loved for a reason,” she said. “I could have been in it for a brief little nothing, and I would have been thrilled and delighted.” She went on, “To be taken seriously, a women of color at 44 years old and be in a dope-a– franchise. It’s when you just let go.”

That little mantra has helped her rid herself of pain and suffering.

Still, Newton addressed the magnitude of taking a role in such a series, saying, “It’s like you’re going through a portal that is beloved by all of humanity.”

Newton also noted the importance of diversity in future adaptations of “Star Wars.”

“We are all in this together, and we need to let go, accept, not be so afraid, fight for the truth if we know it, if we don’t know it, ask questions until you do know,” Newton said.

Added Winfrey, “That’s what these times and future times call for. The best of us.”