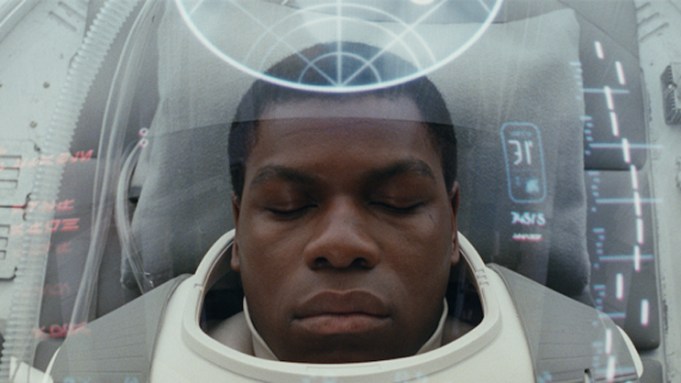 The highly-anticipated trailer for “Star Wars: The Last Jedi” is here.

Disney and Lucasfilm dropped the footage on Friday at Star Wars Celebration in Orlando, Fla. during a panel dedicated to the movie featuring Lucasfilm President Kathleen Kennedy and “The Last Jedi” director Rian Johnson.

The trailer opens with Rey on the island where we saw Luke in “The Force Awakens.” The two-minute-long teaser flashes several powerful images across the screen including a destroyed helmet overlaid with sounds of Darth Vader’s breathing. There are also shots of an injured Finn in some type of stasis pod, Rey training of the island and Kylo Ren brandishing his lightsaber.

At the end, a haggard Luke says, “I only know one truth. It’s time for the Jedi to end,” partially explaining the film’s ominous title.

At the event where the trailer was screened, several stars made surprise appearances including Daisy Ridley, John Boyega and a new addition, Kelly Marie Tran.

The film also stars Carrie Fisher who died on Dec. 27. Although Fisher was originally expected to appear in the ninth episode as well, Lucasfilm announced that there are “no plans” to digitally recreate her in future films. Fisher had wrapped shooting “The Last Jedi” before her death.

The studio been teasing footage for the film since a Disney shareholders meeting March — more than nine months before the film will officially open.

“Star Wars: The Last Jedi” is scheduled to hit theaters on Dec. 15. Watch the trailer above.