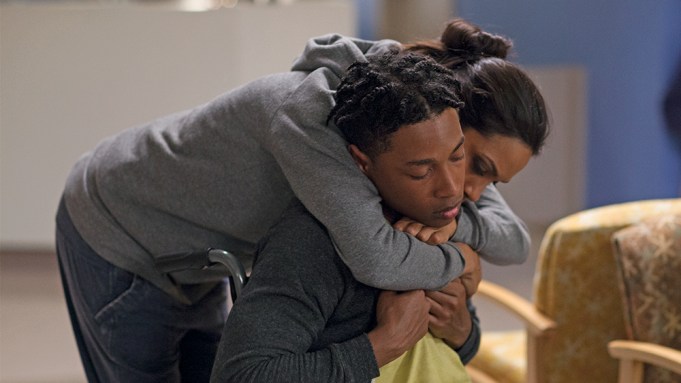 For all the noise Hollywood has made these past few years over the issue of racial diversity and gender equality in film and TV, one segment of society remains drastically underserved — the disabled. Strides have been made — Becky (Lauren Potter) on “Glee” had Down syndrome; ABC series “Speechless” centers on JJ, a teenage boy with cerebral palsy played by Micah Fowler, who has the disorder in real life — but those examples are few and far between. For the most part, there are no disabled characters on the big and small screens, and if there are, they are not played by actors with disabilities. Financial constraints and budgetary concerns are often cited as the reason studios don’t do a better job of hiring disabled actors. Even more disheartening is that if there is a story focusing on a character with a disability, his entire life story revolves around the fact that he is disabled. Case in point: in the 2016 romantic drama “Me Before You,” the lead character, a rich man paralyzed from the neck down in a motorcycle accident, is so miserable, he checks himself into a Swiss assisted-suicide center and kills himself.

Leopoldine Huyghues-Despointes, a French-American actress, producer and founder of the nonprofit group (dis)Abled Visionaries, has set out to change all this. Hers is a two-pronged mission: to debunk the pervasively negative stereotypes of the disabled and raise the profile for those struggling to find lead roles.

“I’m against pity, I’m against misery,” says Huyghues-Despointes, who has osteogenesis imperfecta, a genetic brittle-bone disease and uses a wheelchair. “It’s crazy to see that most of the big roles of characters with disabilities are played by actors without disabilities and that really annoys me. We don’t see wheelchairs on the big screen. We don’t talk about sex and disabilities. One out of five people in the United States has a disability — and we don’t talk about. And that’s what I am trying to change. I want to be the be the first actress in a wheelchair to win an Oscar.”

And she is doing something about it. For her role in “Atlantic Avenue,” Laure de Clermont-Tonnerre’s 2013 short film about a wheelchair-bound teenage girl who loses her virginity to a male prostitute, Huyghues-Despointes won the actress prize at the Milwaukee Film Festival (the film won Special Jury Prize at Nantucket Film Festival). She’s developing a TV series about a disabled woman with Sarah Jessica Parker and has a lead role in Jean Emmanuel Godart’s mystery drama “Big House,” starring Gerard Depardieu.

“It’s the first feature film where the female actress in a wheelchair holds a gun and then actually becomes crazy and has a super intense role, so that was amazing,” she says.

Where Hollywood has a tendency to beatify the disabled, depicting them without emotional depth or personality flaws, “Speechless” creator Scott Silveri was committed to crafting JJ as realistically as possible — hormones, faults and all.

“Disabled characters can be exalted in an unrealistic way, which makes them less of a person,” says Silveri. “With JJ, I just thought about him as a kid, this 15-year-old boy, and there’s nothing angelic about a 15-year-old boy. Once we narrowed that down, that was the key to unlocking the show. We have JJ give the finger. He’s mischievous and talks back. I didn’t want the disability to define the character, because if it’s only about the wheelchair then it’s not a character worth writing for.”

Bobby, one of two teen protagonists in William H. Macy’s dramatic comedy “Krystal,” defies stereotypes at every turn. Played by breakout actor Jacob Latimore, Bobby is confined to a wheelchair, but he is in no way a victim. He’s flippant, street smart and far more sensible than almost anybody else in the film, which focuses on a teenage boy (Nick Robinson) who falls hard for Bobby’s mother (Rosario Dawson.)

“His identity was not that he was in a wheelchair, his function was as the voice of reason,” says Macy, who, after playing a salesman with cerebral palsy in the Emmy-winning 2002 film “Door to Door,” spent two years as a goodwill ambassador for United Cerebral Palsy. “Bobby is really the most level-headed person in his family. He’s not even the disabled one in a way, and it challenges what our definition of being disabled is.”

Latimore isn’t disabled in real life, but his handling of the role was spot on, says “Krystal” producer Rachel Winter. “Bobby never asks to be treated differently by anybody and he asserts himself whenever necessary. He’s essentially the grown up,” she says. “Jacob just understood that and he grabbed onto that.”

“It’s a big step that Hollywood still needs to take which is when you put characters with disabilities into a film that you go beyond the disability and make it about something else,” adds Macy. “We learn by doing. And I think we need to accelerate it. It’s going to take will on our part and it’s going to take consciousness. But I feel the tide has turned.”

Huyghues-Despointes also points out that the goal is not just to write roles for people with disabilities. It’s about casting disabled actors in “regular” roles.

“You can have an actress with a disability play a character that was not supposed to have a disability,” she says. “If you see more disabilities on the big screen it’s going to help more filmmakers see that we’re here, we exist and we can fulfill the roles. The more you see it, the more it’s going to happen.”