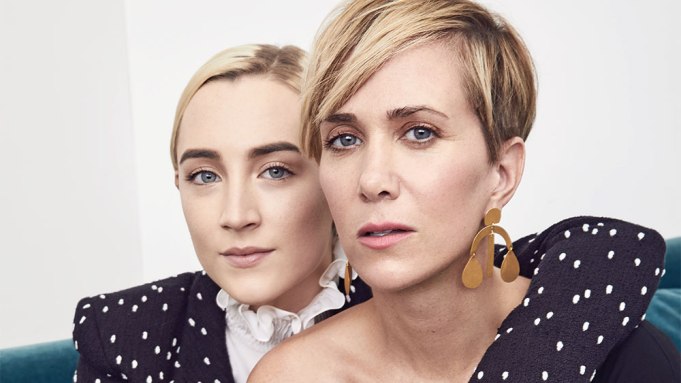 Saoirse Ronan and Kristen Wiig discussed the importance of taking personal time amid their busy schedules during a conversation for Variety’s “Actors on Actors” series.

“What it boils down to is my mom is the best,” Ronan said of her own ability to stay grounded.

Though she made her feature film debut in 2007’s “I Could Never Be Your Woman,” Ronan said going to industry parties and events to promote her current project, “Lady Bird,” “feels like it’s happening for the first time,” adding, “I really wasn’t a part of all that when I was a kid.”

“I don’t know if it’s just me, but I do think there’s more pressure put on kids who are actors or in the public eye to be on social media and promote themselves,” Ronan said. “None of that was around even when I was a kid.”

In addition to support from her parents, Ronan said living outside of L.A. when she’s not working has helped her stay sane.

“You can come here if you know yourself, you’ve got your friends, you’ve got your group of people, but I think it’s very important for me just to personally physically have separation from this world,” she said. “It means when I’m not doing this, I’m very much somewhere else in every way.”

Wiig said it took years before she learned to unplug and take breaks. While she was on “Saturday Night Life,” Wiig estimated, she hadn’t taken a week off in 10 years.

“I didn’t do that for such a long time,” she said. “Being on ‘SNL’ for most of the year, and then I would shoot in the summer and then in those few weeks off I would be doing press for the things that had just come out. I didn’t know that was not normal.”

It was Jonah Hill, whose sister stars alongside Ronan in “Lady Bird,” who finally encouraged Wiig to take a hiatus longer than two weeks.

When she left “SNL” in 2012, Wiig said she went through a period where she felt lost.

“It was like someone took an IV out of my arm. I just felt like I was breathing different air,” Wiig described. “You’re in this world, and you’re with the same people. 30 Rock, you just live in the building. Even on the weeks off, you’re still hanging out with each other in New York.”