Continue to Variety SKIP AD
You will be redirected back to your article in seconds
Nov 27, 2017 2:03pm PT

Salma Hayek and Mary J. Blige on ‘Connecting to Other Women’ Through Their Characters 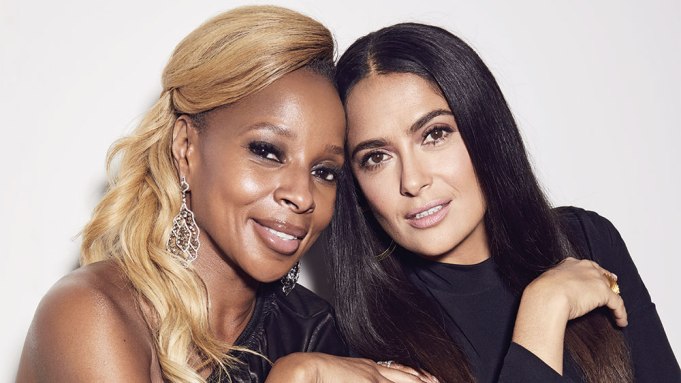 Salma Hayek (“Beatriz at Dinner”) and Mary J. Blige (“Mudbound”) sat down for a chat for Variety’s “Actors on Actors,” presented by Google Home, which airs from Jan. 2 to Jan. 4 at 7 p.m. on PBS SoCal KOCE.

Salma Hayek: I want to ask you a question that many times actors don’t even know themselves: Do you know why Dee Rees offered you this role in “Mudbound”?

Mary J. Blige: She told me that she offered me the role because she didn’t know anyone else that can play such a reserved, quiet but powerful woman at the same time. She saw that in me when she met me, and then she was at one of my concerts and she saw how explosive I was. Speaking to me later, I’m not that explosive. I’m just kind of quiet and reserved.

Hayek: What did you think when you read the script and you began to explore the role?

Blige: I was blown away by the love story that was in all of the horror. And then this character, Florence, was exactly who my grandmother is, and exactly who all of my aunts are. I was also happy to play Florence because I could just give her so much of my heaviness. I was having a lot of heaviness at the time, due to my personal life, and I would just give it to Florence. All my insecurities, all my sadness and anger and paranoia. Whatever it was, I would give it to Florence.

Hayek: It’s a beautiful thing, no? When you can really connect to other women through your characters.

Blige: How did you come to be involved with “Beatriz at Dinner”?

Hayek: It was a very strange thing because I’ve had to struggle really hard to get good roles. Sometimes even for the bad ones, I’ve had to struggle to get them. And this time, it was such a beautiful thing that happened to me, because Miguel Arteta, who I am a huge fan of, and Mike White, who I just think is one of the best writers in America today … they came to me and they said, “We have a project that we want you to be in.” I was super excited, and I said, “Can I read it?” And Mike said, “I haven’t written it yet. I just have, like, an idea.” But I said yes. Two weeks later, on my birthday, I get an email from Mike that said, “Happy Birthday.” And it was this beautiful gift.

Blige: I have to share this with you. I saw you in a movie called “From Dusk Till Dawn.” And I was like, “Oh, my God, this woman’s body is my inspiration.” You are one of my inspirations for being in the gym every day. I’ve been training like a maniac since then.

Hayek: You know, I don’t watch my own movies very often. But something different happened with “Beatriz,” because this movie surprised me so much when I saw it that I wanted to see it again and again. I really didn’t think anybody was going to like this film or watch it, because the camera was on my face, and I was not allowed to move or cry or nothing. And I thought it was going to be so boring. And I kept saying to Miguel, “They’re gonna be bored. Move away from me.” And he said, “Oh no, I know exactly what I’m doing.” I was so lucky to work with this amazing director. So this is the one film that, every time I watch it, every single performance, I find something different and nuanced in every single actor.

Blige: For a long time I wasn’t able to hear my own speaking voice back. I definitely don’t like looking at myself. But I had to look at myself in “Mudbound” at Sundance. And when I saw Florence, I cried. Because she was in so much pain.

Hayek: That happens to me too.

Blige: Florence came at a time where I was really low, feeling super, super insecure, not sure of my life, not sure of even who I was, and I didn’t really realize I was hanging on to so many things of the world that made me feel beautiful. So, when it was time for Dee to strip me down, I fought. Like I was fighting to keep lashes, I was fighting for fingernails and fighting for wigs and things like that, and I just didn’t want to. I didn’t want to strip down because I didn’t want to. I just was afraid. And Dee finally convinced me to trust her in this, and once I trusted her and let Florence live, she really liberated me. She really opened me up to my own inner beauty for real. So she completely really helped me through a hard time.