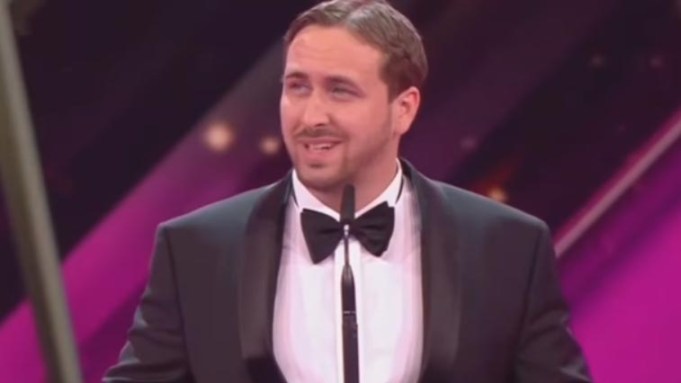 The award show gaffes have not ceased after the Oscars. During one of Germany’s biggest and most prestigious ceremonies, the Goldene Kamera Awards, the trophy for best international film was handed to a Ryan Gosling impersonator, on behalf of “La La Land.”

“The directors couldn’t be here today but someone else agreed to take the award,” host Steven Gaetjen told the audience. “And we are very happy that he is here today, because he is the reason this movie is a huge success.” He continued, “Men hold onto your wives and wives hold onto your men, here is the one and only Ryan Gosling.”

The impersonator is identified as Ludwig Lehner, a chef from Munich. Upon his introduction, Lehner walked onto the stage and accepted the award, garnering a range of reactions from the audience. While Nicole Kidman looked shocked yet somewhat amused, the camera also panned to a much less entertained Colin Farrell and a seemingly flabbergasted Jane Fonda.

Goldene Kamera was allegedly so eager to get Gosling to show up at the ceremony that they agreed to several demands, such as forbidding Gosling to walk the red carpet or meeting with the show’s host beforehand. The group assembled a full team to pull off the stunt, by which they surrounded the Gosling impersonator with handlers who tried to shield him from the scrutiny of event organizers.

The duo set up the prank for their own television show entitled “Circus Halligalli,” and on Tuesday evening they explained the execution of the stunt.

“We were sure it would never work,” Heufer-Umlauf explained to Meedia, a German media industry paper, about the prank.

After the prank was successfully carried out, the host of the show apologized to the audience, in a moment not unlike the blunder during Oscar’s night in which “La La Land” was incorrectly announced as the winner for best picture.