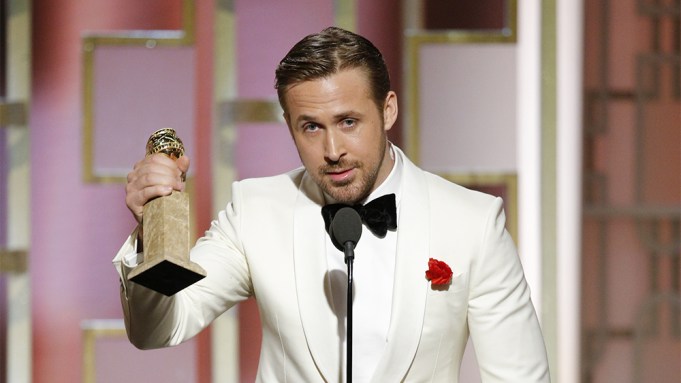 Ryan Gosling won the Golden Globe for best actor in a musical or comedy for his role as a struggling jazz musician in “La La Land,” and ended his speech on a somber note.

In an emotional speech, Gosling thanked his wife, Eva Mendes, and dedicated the award to her late brother, Juan Carlos, who died of cancer in April at the age of 53.

“You don’t get to be up here without standing on the shoulders of a mountain of people. There’s no time to thank everyone,” he said. “I would like to try and thank one person properly and say that while I was singing and dancing and playing piano and having one of the best experiences I’ve ever had on a film, my lady was raising our daughter, pregnant with our second, and trying to help her brother fight his battle with cancer.

If she hadn’t had taken all that on so that I could have this experience, it would surely be someone else other than me up here today. So sweetheart, thank you.”

“If I may, I would like to dedicate this to the memory of her brother, Juan Carlos Mendez,” he concluded.

He topped Colin Farrell for “The Lobster,” Hugh Grant for “Florence Foster Jenkins,” Jonah Hill for “War Dogs,” and Ryan Reynolds for “Deadpool” — which Gosling made a joke about. “This isn’t the first time I’ve been mistaken for Ryan Reynolds, but it’s getting out of hand. Ryan, obviously, there’s been some kind of mistake.”

“La La Land,” directed by Damien Chazelle, premiered at the Venice Film Festival on Aug. 31. Gosling and Emma Stone portray a couple who fall in love and then see their relationship slowly fall apart amid an idealized Los Angeles.