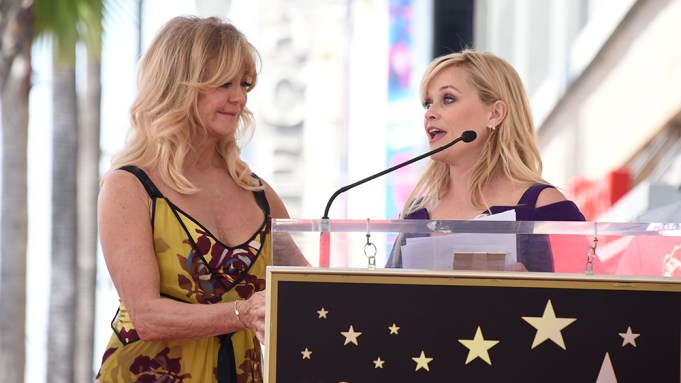 “The first time I ever fell in love with a movie star, it was Goldie Hawn,” said Reese Witherspoon, speaking from behind a (quite literally) star-studded podium along the Hollywood Walk of Fame on Thursday.

Witherspoon was one of three speakers (along with Kate Hudson and director Quentin Tarantino) at Hawn’s and Kurt Russell’s ceremony commemorating the couple’s Walk of Fame stars. “Oh my gosh, I’m going to try not to cry,” Witherspoon continued, choking up during her speech.

After taking a moment to collect herself, Witherspoon continued to profess her admiration for Hawn. She described a time in 1986 when her father had taken her to see “Wildcats,” the feel-good sports comedy film starring Hawn as a sunshine-y high school track coach who quits her job to coach a football team across town.

So, when she was presented with the opportunity to speak at Hawn’s ceremony, Witherspoon was thrilled.

“I can’t believe Goldie actually texted me, about a month ago, and asked me to be here,” Witherspoon said. “Huge honor.”

And, in keeping with her well-established history of charming, quippy speeches, Witherspoon added: “I hope it’s not weird that I printed out a text and I framed it and I put it on my wall.”

But, between these women, honorary tributes are a two-way street. At Glamour’s 2015 Women of the Year Awards, Hawn presented Witherspoon with an award for her work in creating stronger, more independent women characters onscreen.

Still, Witherspoon emphasized that her reverence for the 71-year-old superstar is pretty unparalleled.

“I had to go down and make an ‘I Love Goldie’ button because I am literally her biggest fan,” she says. “Really, I mean it.”

And, in case there was any shred of doubt, Witherspoon revealed that her very first email address was overboard@aol.com — a reference to both Hawn and Russell’s 1987 romantic comedy film of the same name.

Then, employing the same kind of heartfelt sweetness that made her Glamour acceptance speech a bona fide tear-jerker, Witherspoon pivoted:

“That’s how much I love these two people.”

Watch Witherspoon’s full speech here or in the video above.