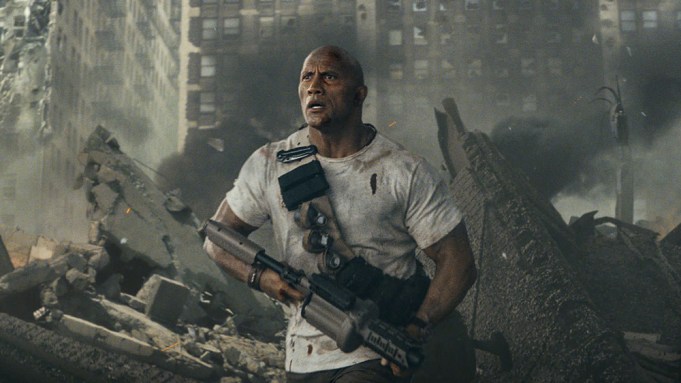 It’s up to Dwayne Johnson to save the world, with a giant ape named George on the loose, in the first trailer for New Line’s action adventure “Rampage.”

Johnson portrays a primatologist who keeps people at a distance, but shares a bond with George, a silverback gorilla who has been in his care since birth. But a rogue genetic experiment mutates the gentle ape into a raging creature of enormous size — along with other similarly altered animals across North America, destroying everything in their path.

“You don’t know about the 30-foot wolf?” Johnson’s asked at one point.

The key plot point in the trailer comes when a caged George is put on a jet airline, despite Johnson’s advice: “Having George on that plane is a big mistake.”

We then see George busting out of a cage and the plane winding up on fire over Chicago. Later on, Johnson’s character is piloting a helicopter over a river and observes with his trademark wit, “I was just thinking that the only thing missing is a giant crocodile.”

“San Andreas” director Brad Peyton helms from a screenplay by Ryan Engle, Carlton Cuse, Ryan J. Condal, and Adam Sztykiel with a story by Ryan Engle, based on the video game “Rampage.” The film is produced by Beau Flynn, John Rickard, Hiram Garcia, and Peyton.