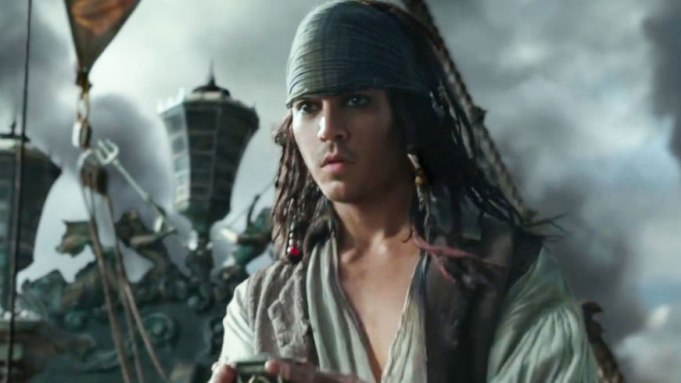 The swashbuckling pirates are back in the new trailer for “Pirates of the Caribbean: Dead Men Tell No Tales.” Javier Bardem’s Capitan Armando Salazar leads an army of the dead as they exact revenge on the drunken Jack Sparrow, who’s seen pantless and ship-less in the new footage.

The trailer reveals the origin story of Sparrow’s enemy Salazar, showing the Spanish captain’s quest to rid the seas of pirates.

The new footage also includes a first look at a young version of the captain of the Black Pearl. Aged back at least 20 years, a freshly-shaven (or perhaps pubescent) Sparrow lands on Salazar’s ship as the uniformed Salazar confidently cannonballs other vessels at sea. But the tides turn, and Sparrow gains the confidence that ultimately defines his character, as he throws a casual smirk at the Spaniard before his fate befalls him: a death imprisoning him and his army in the Devil’s Triangle.

“He took everything from me and filled me with … rage,” Salazar huskily growls in the trailer.

It’s not clear whether or not the young Sparrow is played by a Johnny Depp doppelganger or is digitally de-aged like Princess Leia and Grand Moff Tarkin were in “Star Wars: Rogue One.” The theory is bolstered by the fact that no actor is listed on IMDb in a young Sparrow role.

The rest of the trailer features Kaya Scodelario as astronomer Carina Smyth, who joins Sparrow and Henry (Brenton Thwaites) to battle Salazar. Hector Barbossa (Geoffrey Rush) also makes his return and shares many scenes with Salazar, raising concern for the state of Barbossa’s alliances.

“Pirates of the Caribbean: Dead Men Tell No Tales” hits theaters on May 26.