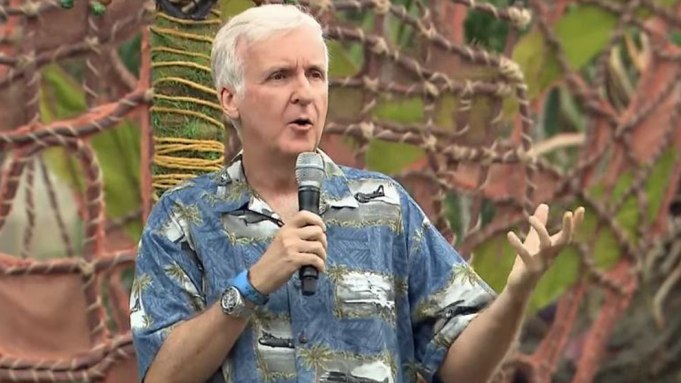 “This is literally a dream has come true,” explained Cameron, who first conceived the world of Pandora in his sleep as a 19-year-old.

The park — the largest expansion in the history of Disney’s Animal Kingdom — was inspired by that dream and the 2009 blockbuster “Avatar.” It officially opens on May 27, but VIP guests were treated to a special dedication ceremony.

Iger thanked the imagineers who conceived and executive the project, as well as the man who created the world of “Avatar” — Cameron himself.

“”He does the impossible again and again and again, merging wonderful storytelling with mind-blowing technology to create experiences that no one has seen before. And ‘Avatar’ is definitely one of them,” Iger continued.

Among the attractions in the new expansion: a first person 3D ride called Avatar Flight of Passage, a gentler ride through a bio-luminescent forest called Na’vi River Journey, and the exotic environs of the Valley of Mo’ara.

“This is the kind of emotional experience that is not only part of the brand story for  our films, it’s a reminder of the stunning world created in James Cameron’s imagination — a world that will astonish and delight generations to come, both on screen and through immersive fan experiences like Pandora the World of Avatar.” said Stacey Snider, CEO and Chairman, 20th Century Fox Film.

Many of the “Avatar” cast — including Sam Worthington, Zoe Saldana, and Sigourney Weaver — joined Iger, Cameron and Snider for the celebration.
According to Iger, “Pandora is just as great in person as it is on screen.”

Check out the dedication ceremony here or above (jump to the 9:50 mark).