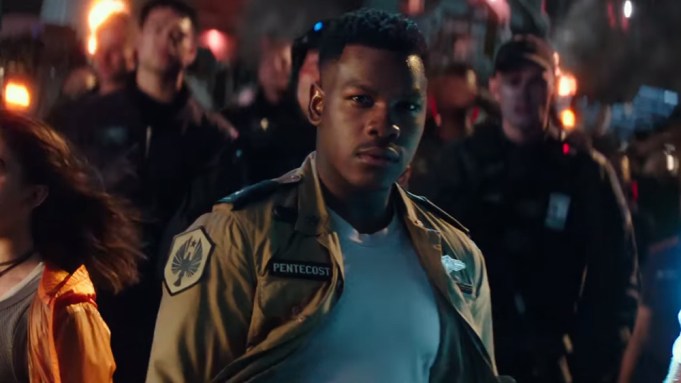 The uprising has begun.

“We were born into a world at war. Between the monsters that destroyed our cities and the monsters we created to stop them, we thought we had sacrificed enough,” John Boyega’s Jake Pentecost narrates in the clip. “But the war we thought we finished is just beginning, and the only thing standing in front of the apocalypse is us.”

From there, the action-packed preview introduces a new generation of Jaeger pilots ready to combat the evolving Kaijus and prevent humanity’s extinction. The sequel picks up 10 years after the Battle of the Breach, and Boyega takes up the legacy of his father (Idris Elba’s character), who sacrificed his life in the first film.

“Pacific Rim,” directed by Guillermo del Toro, starred Elba, Kikuchi, Day, Charlie Hunnam, and Robert Kazinsky. It was set in the near future with Earth at war with the Kaiju monsters that emerged from an inter-dimensional portal at the bottom of the Pacific Ocean. The pic grossed $411 million at the worldwide box office.

The upcoming sequel from Legendary and Universal hits theaters on March 23.