Anna Faris Gets Revenge on Eugenio Derbez in ‘Overboard’ Trailer 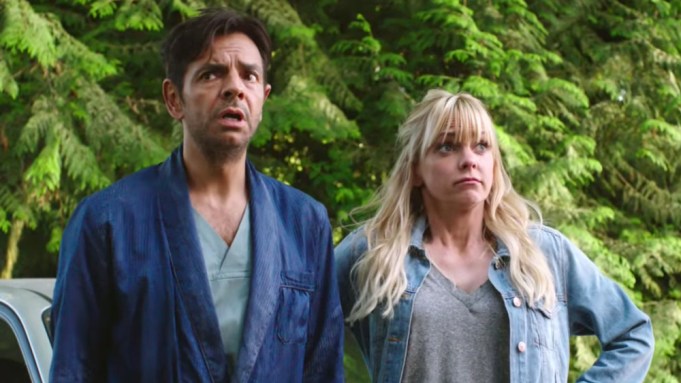 There’s big-time payback for Anna Faris against Eugenio Derbez in the first trailer for the remake of “Overboard.”

The new film, which opens April 20, is a role reversal on the 1987 original. Goldie Hawn played a selfish heiress who got amnesia when she fell off her yacht, while Kurt Russell portrayed a carpenter who ultimately fell in love with her in the romantic comedy.

The footage shows Faris — a single mother struggling to make ends meet — picking up a carpet cleaning gig on the yacht of a millionaire, played by Derbez, who treats her abusively and tosses her rented cleaning equipment overboard. But then a storm sends him tumbling overboard and he loses his memory, opening the door for Faris and to persuade him that she’s his wife, the father of her children, and a financial provider holding down three jobs.

Eva Longoria stars as Faris’ best friend who helps her cook up the ruse, describing it as “almost poetic in its justice.” John Hannah, Swoosie Kurtz, and Josh Segarra also star.

The remake is co-directed and written by Rob Greenberg (“How I Met Your Mother”) and Bob Fisher (“We’re the Millers”). Ben Odell and Derbez are producing through their 3Pas Studios. MGM partnered with Pantelion Films to co-produce, co-finance, and co-distribute the film.