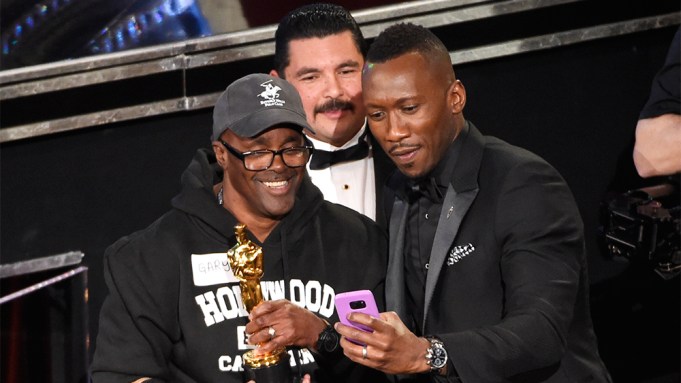 If you didn’t receive an invitation to the 2017 Oscars, you may want to book a seat on a Sunday evening Star Tours come next year, because host Jimmy Kimmel just brought an entire bus-full of tourists into the Dolby Theater.

On the count of three, Kimmel instructed the seated attendees to shout “Mahershala” as the flustered crowd marched in with wide eyes and selfie sticks in hand.

Good-natured celebs posed for pictures with the sweatshirt-clad citizens. Jeff Bridges was kind enough to fist-bump a passing tourist while Nicole Kidman got a lucky kiss on the hand from Gary, a visitor from Chicago.

Gary from Chicago! We've got you covered if you want to come to a game! #Oscars

Mahershala Ali handed over his recently won Oscar statuette for a selfie with Gary, who continued to snap pics of Octavia Spencer and other black actors before Kimmel asked him, “Are you ignoring the white celebs?”

Gary’s fiance, Vicki, got a chance to call out her favorite actor Denzel Washington. Kimmel even asked Washington to join the wedding party as Gary’s best man. She also received a kiss on the cheek from “La La Land” star Ryan Gosling, which seemed to shake her to her core.

Many of the guests seemed genuinely shocked that the Oscars were taking place, while one man was less than enthused. Twitter is divided on the skit; some people are jealous they missed their chance at a once-in-a-lifetime experience, but others critiqued the pretension of the Oscars inviting “normal” folks in when the Academy is claiming more inclusivity than ever before.

Check out Keith Urban’s video of the bit below: