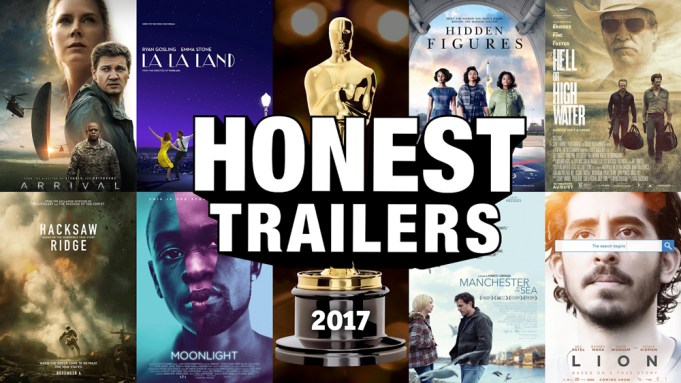 The ever-clever Honest Trailers produced by Screen Junkies just wouldn’t be the same without an Oscar installment. In the newest edition, Hollywood gets roasted for its selection of nine best picture nominees. “They’ve got to stop releasing all these movies at the same time,” the voiceover mocks. With less than a week to go before Hollywood’s biggest night, the industry could probably use a couple lighthearted jokes.

The video runs through all the nominees, beginning with “Arrival” and moving onto “Lion” (“If you say you’ve seen this, you’re probably lyin’.”) “Hell or High Water” gets the same treatment. Paired with clips of “True Grit,” the trailer promises viewers a chance to hear “that one grizzled cowboy voice Jeff Bridges does.”

“For a film that’s so entertaining, straightforward, and unpretentious, it has no chance of actually winning best picture,” says the voiceover. Touche, Screen Junkies.

“Hidden Figures” (retitled “Diary of a Black Math Woman”), the untold story of black women who worked as NASA scientists, took place during a less tolerant time. But fear not; “it won’t make white people feel too bad about themselves. See, Kevin Costner’s one of the good ones!”

Casey Affleck is called out for playing “a hard-drinking, irritable Boston man living in the shadow of his more successful older brother” in “Manchester by the Sea.”