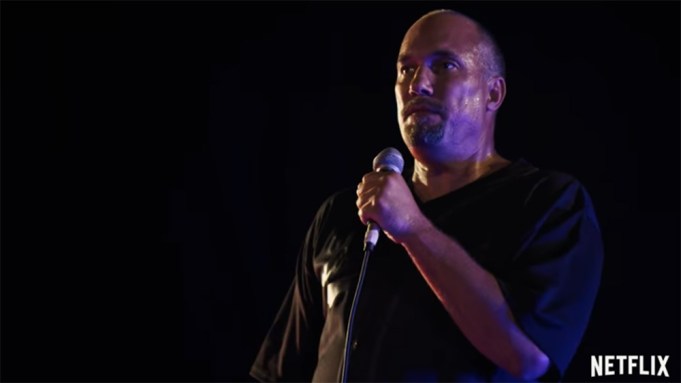 The first trailer for Netflix’s “Rodney King” takes viewers back a quarter of a century to the 1991 beating of King and the 1992 Los Angeles riots.

“Before you know it, you’re the first reality TV star,” intones Roger Guenveur Smith, filmed last year by Spike Lee in a one-man show. The streaming service has scheduled the project to premiere on April 28.

In the trailer, Smith can also be seen citing LAPD officer Stacey Koon as quoting Marvin Gaye with the phrase, “Let’s get it,” prior to beating King.

The date for airing “Rodney King” has been chosen to coincide with the upcoming 25th anniversary of the state court acquittals of Koon and three other LAPD officers who were videotaped beating King in 1991. The acquittals, which took place in Simi Valley, California, sparked three days of rioting that left 53 dead.

The trailer also explores that role King played in ending the rioting, thanks to an interview he gave on May 1, 1992, the third day of the disruptions. A clearly distraught King asked plaintively, “People, I just want to say, you know, can we all get along? Can we get along?”

King died in 2012 by drowning, following a lifetime of battling alcohol and drug abuse and repeated run-ins with the law. The events led Smith to explore King’s life as the basis for a one-man show.