Mark Hamill Shares Emotional Tribute to Carrie Fisher: ‘Part of Me Did Fall in Love With Her’ 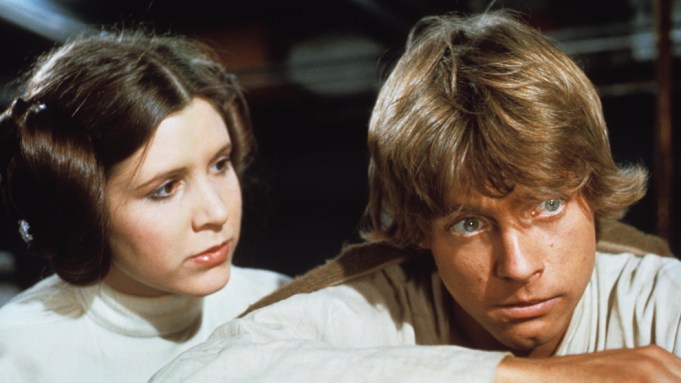 “Here’s a panel I was hoping wouldn’t happen for another 30 years,” Mark Hamill announced at the top of his tribute to his late co-star Carrie Fisher, who died last December at age 60.

The actor celebrated Fisher’s life, shared anecdotes from the “Star Wars” set and, at one point, got choked up recalling her death during “Star Wars Celebration” on Friday. The tribute was interspersed with memories of Fisher shared by Warwick Davis and pre-taped salutes from George Lucas, Kathleen Kennedy, and Rian Johnson.

But, for the most part, Hamill held the stage on his own and captured the audience’s attention throughout the bittersweet 60-minute event. The actor admitted to the audience that since Fisher’s death, he keeps reverting to the “anger” stage of grief. “She should be here,” he said.

Hamill remembered the first time he and Fisher met, over dinner in London before they filmed “Star Wars: Episode IV  — A New Hope.” “Within 20 minutes she was telling me personal stories that I wouldn’t have shared if I knew you 10 years,” he recalled.

Later, he retold an incident where the two made out on a couch”like a couple of horny teenagers”  during the “New Hope” era. “By the end we were laughing,” he said, grateful to learn that they could never have been more than friends. It was for the best though, since his Luke Skywalker and her Princess Leia were siblings on screen.There was a period of time, Hamill said, when the castmates fell out of contact. When their characters for revived for “The Force Awakens,” he said it gave them a chance to reconnect. At one point, Hamill mourned her death in a sense that he felt she was hitting her stride as an older actress. Of her character in “Catastrophe,” Hamill said, “She is the crusty old broad that always lurked inside of [Fisher].”

The panel was not all adoration and sadness. Hamill laughed about the time that Fisher made him dress up in Leia’s outfit, and paraded him around the studio. “I was like her paper doll or something,” he said, adding that she always got her way with him.

More recently, the two were engaged in a race to reach one million Twitter followers. Hamill said he had the idea for the two to pose with their wax figures at Madame Tussauds in London. Later, looking through Twitter, he realized Fisher had gone alone and not told him. Hamill added that Fisher “stole” some of his ideas and stories for her writing, and when he confronted her, she didn’t acknowledge anything.

Hamill joked about a pact the two had made. “I promise … if you go first, I’ll heckle your funeral,” Fisher told him, and made him promise to the do the same — the promise that the actor refrained from keeping.

When Fisher died, Hamill said he didn’t want to write a statement. “I don’t want to talk about it,” he remembered saying. In the end, though, he thanked the audience for helping him “move on” and process the death of his co-star and friend. He confessed at one point, “Part of me did fall in love with her.”

Hamill and Fisher will share the screen one more time in “Star Wars: The Last Jedi.” Kathleen Kennedy confirmed Friday that Fisher will not appear in the yet unnamed ninth film.