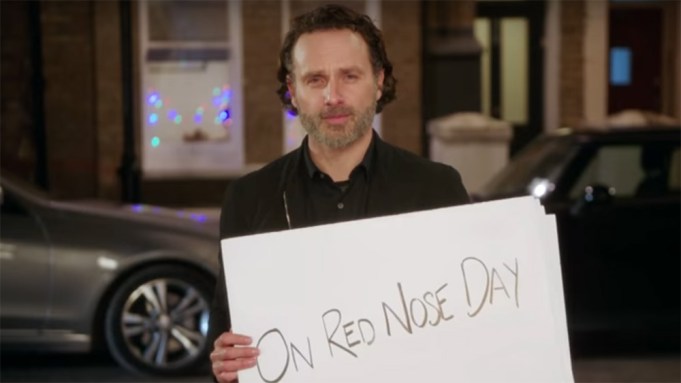 With the memories of Hugh Grant boogieing around Downing Street to the Girls Aloud cover of “Jump (for My Love)” still very clear in many fans’ minds, the cast of “Love Actually” gathered together in a trailer for their special Red Nose Day reunion titled, “Red Nose Day, Actually.”

The trailer begins with the original Brit rom-com’s soaring instrumental score, and features a group of the old cast, including Keira Knightley, Chiwetel Ejiofor, and Bill Nighy, holding up a series of signs giving an idea of what to expect from their return and asking exactly which cast member has aged most gracefully.

The trailer recreates an iconic scene from the original in which Andrew Lincoln’s Mark declares his love for Knightley’s Juliet, despite her recent marriage to Mark’s best friend Peter (Ejiofor), only this time, the cast are asking the audience to “tune in to see…which one of us aged best.”

While the trailer leaves it up to the viewer to judge, Grant helps rule out one possible candidate with a sign that reads, “one thing’s for sure…it’s not Colin Firth,” who happens not to be in trailer.

“I think it’s obviously Liam, isn’t it?” reads the sign held up by Liam Neeson himself with a knowing nod and smile.

For the younger cast members, Thomas Brodie-Sangster and Olivia Olson, who were only in their early teens at the time of the film’s release in 2003, the signs read that they’ve “grown up.” But for perennial funny man Nighy, who played aging rocker and man-child Billy Mack in the original, not much growing up has taken place, as the actor holds up a sign saying, “I haven’t really.”

Although almost the entire star-studded cast will appear in the special reunion, Emma Thompson announced in February that she will not be taking part because of the death of Alan Rickman, who played her husband in “Love Actually.”

“It’s too soon. It’s absolutely right because it’s supposed to be for Comic Relief but there isn’t much comic relief in the loss of our dear friend, really, just over a year ago,” Thompson said.

Viewers can see for themselves who has aged best or grown the most when the Red Nose Day “Love Actually” special airs Thursday, May 25 on NBC.