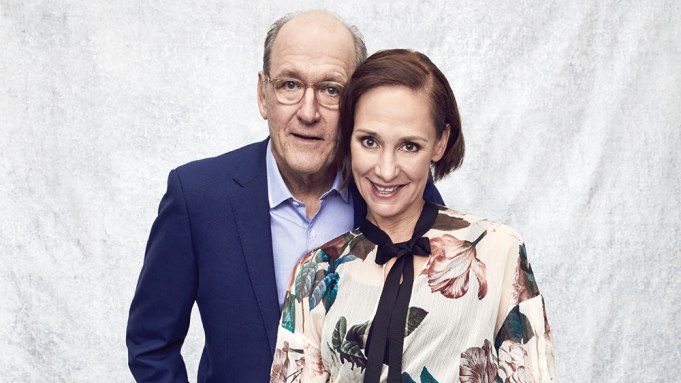 Laurie Metcalf (“Lady Bird”) and Richard Jenkins (“The Shape of Water”) sat down for a chat for Variety’s “Actors on Actors,” presented by Google Home, which airs from Jan. 2 to Jan. 4 at 7 p.m. on PBS SoCal KOCE.

Laurie Metcalf: I got a call from Greta Gerwig; I think I was on Scott Rudin’s radar at the time, and he suggested me to be in the cast. We had a great chat on the phone, and I had responded to the material.

Richard Jenkins: How could you not?

Metcalf: I know, right? It’s all on the page. It’s rare when you see something that is all the answers right there. And by talking to Greta, I knew that she knew exactly where the key moments were going to be. I could identify with the mother-daughter clashing; I had a teenager at home. I knew she saw all of her characters as three-dimensional. Everybody has a story — as in “The Shape of Water.” I don’t know if you saw that on the page also.

Metcalf: Isn’t that like the best Christmas present in the world? You get delivered a piece of writing, and you think, “Me? You’re going to let me interpret this?”

Jenkins: Well, that’s where you want to call them up and say, “You sure it’s not Kenneth Jenkins?” That is something I love about this profession: I don’t know what’s coming around the corner.

Metcalf: I actually like to audition. I prefer to audition for something because I don’t want to walk onto a stage or a set and [have someone] say, “You are so far away from what I thought you were going to bring in.” I would feel more comfortable to audition and say, “Here’s my take on it — take it or leave it.”

Jenkins: I went in to audition for “Nebraska,” the Bruce Dern part. They talked to me about some other part, but I said, “No, that’s the part I want to play.” I said, “I want to come in and read, if you don’t mind.” I don’t mind auditioning.

Metcalf: I don’t either. But I still get nervous.

Jenkins: Oh, terrified. When I was in Rhode Island, I would get a call to come in and audition in New York, and I would have to take the train. It was four and a half hours, and my line literally would be “Freeze!” “Thank you.” I did this for 20 years.

Metcalf: Tell me about “The Visitor,” because you were the lead, and that was new, right? Did you know that you have to pace yourself? I’ve always just popped in and out of a movie role especially, and you’d be there for like days and then you’re just gone.

Jenkins: I really liked it. But you know, it was like, you couldn’t go to craft service — you’re in this!

Metcalf: I find it sometimes harder to do the little pop-ins, the little drop-ins. All of a sudden, you’re like, ‘I can’t remember my line!” But I can learn something that’s longer.

Jenkins: Very hard. But I remember sitting at Toronto for the first screening, and a thought occurred to me — it had not occurred to me before: If this movie doesn’t work, it’s my fault.

Jenkins: Then I started to understand what it means to carry a film.And the actors they pay a ton of money to, there’s a reason.

Jenkins: I find press is something I didn’t know was in the cards. And you know the fact is, I’m grateful that anybody would ask me to do it. I mean it’s very flattering.

Metcalf: And it’s great promotion. That’s what it’s for.

Jenkins: Especially if you love the movie. But I didn’t know this was part of the deal. And one of the reasons I became an actor is so I didn’t have to be on TV and talk to people as me.

Metcalf: Or do any part of a business side of something.

Jenkins: I feel inadequate, and I feel like I have nothing to say, and yet I never shut up.

Jenkins: I’ve got about nine stories that I tell.

Metcalf: I gotta get a story.

Metcalf: Me too. That’s my biggest fear. Even in print. I’ll hear something come out of my mouth and I think I sound like an idiot, but in print I’m going to look even more like an idiot. It always looks worse. It’s a lose-lose situation.