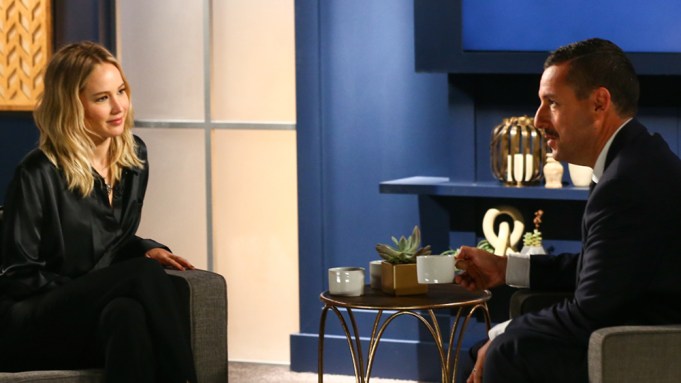 Jennifer Lawrence and Adam Sandler exchanged stories about dealing with criticism during an interview as part of Variety’s seventh “Actors on Actors” series.

Sandler said he generally avoids reviews, while Lawrence joked she reads them “only when they’re good.”

Though the actress said she doesn’t actually harp on critiques, her experience with “Mother!” was different because she was dating the film’s director Darren Aronofsky at the time.

“We’d be on the tour together, I’d come back to the hotel and the last thing I want to talk about or think about is the movie, and he comes back and that’s all he wants to talk about,” she recounted. “I was doing double duty of trying to be a supportive partner while also being like, ‘Can I please, for the love of God, not think about “Mother!” for one second?'”

Lawrence added that she gets defensive after reading negative reviews of her work.

“It’s so bizarre because you’re so in the zone, you put your whole soul and body, you move to shoot a movie, and you then love it, obviously because you wouldn’t be there if you didn’t love it, and then people just destroy it,” she explained.

Sandler said he stopped reading reviews after his 1995 movie “Billy Madison” was panned by critics.

“It didn’t make sense to me, and it screwed my thinking up a little bit,” he said.

Even when she receives praise, Lawrence said she still gets “slammed with anxiety.”

“It’s not healthy to realize how many people are actually looking and listening to you,” Lawrence said. “That is such a mindf—.”

The seventh season of Variety’s “Actors on Actors,” presented by Google Home, will air Jan. 2-4 at 7 p.m. on PBS SoCal KOCE.