Jennifer Lawrence and Adam Sandler on Feeling ‘Defensive’ Over Their Movies 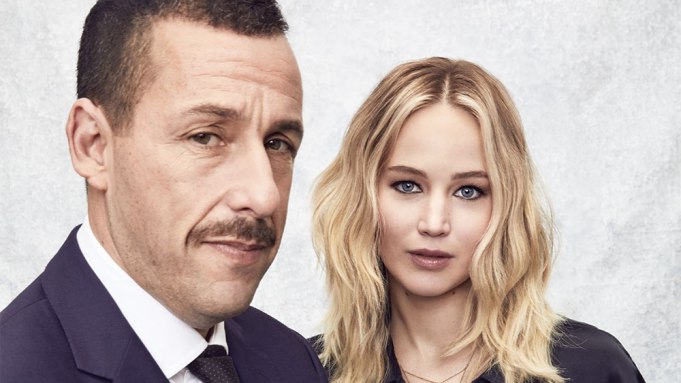 Adam Sandler (“The Meyerowitz Stories”)  and Jennifer Lawrence (“Mother!”) sat down for a chat for Variety‘s “Actors on Actors” presented by Google Home, which airs from Jan. 2 to Jan. 4 at 7 p.m. on PBS SoCal KOCE.

Jennifer Lawrence: How did “Meyerowitz” happen? How did you become a part of that?

Adam Sandler: Do you have a star on the Walk of Fame?

Lawrence: I think so. I have a spotty memory.

Sandler: Well, Ben Stiller got his. I went to see him. I said, “We gotta do a movie together, man.” He said, “Yes, yes.” I said, “We should play brothers. I always hear that I look like you.” He said people scream “Zohan!” at him. Then Noah Baumbach was saying he had a movie, coincidentally, about us playing brothers, so we all hung out one afternoon and talked about it. Then Noah wrote the movie.

Lawrence: Oh, he wrote the movie after meeting with you and Ben?

Sandler: We discussed some stuff. All our parents were in hospitals, and we talked about how bad that is, and just talked about different things. Noah went away and wrote the movie. How about “Mother!”? How did that happen?

Lawrence: I heard that Darren [Aronofsky] was making a movie, and I’ve always wanted to work with him. He didn’t have a script yet. He just had these ideas and these metaphors. I thought it was amazing, and I trusted him. If he’s got some bombastic idea, like writing God as a narcissistic artist, it’s going to be pretty cool. So I was in before I read anything. The first time I read the script, I threw it across the floor. I didn’t even want it in my house. I thought it was so fucked up on such a deep level. But I knew that’s what he was doing. That’s the only way to say what he needed to say.

Sandler: Do you read any of the reviews or any stuff about your performances?

Lawrence: Only when they’re good. No, I don’t. Normally, I promote a movie, you put the work in to promoting it, ask people to go see it, and then it’s just kind of out of your hands. I normally just kind of let it go. Dating the director was different, because we’d be on the tour together. I’d come back to the hotel, and the last thing I want to talk about or think about is a movie. He comes back from the tour, and that’s all he wants to talk about. I get it; it’s his baby. He wrote it; he conceived it; he directed it. I was doing double duty trying to be supportive partner while also being like, “Can I please, for the love of God, not think about ‘Mother!’ for one second.” And then he would start reading me reviews, and I finally was like, “It’s not healthy. I’m not going to do it, because if I read it, I start getting defensive.” Especially because it’s my man. I don’t want to sound in an interview that I’m defending what we’re doing in any way. It’s awesome, what we did. The people who hate it really hate it. But it’s nothing that needs to be defended. If I read a negative review, I just feel defensive.

Sandler: When I did “Billy Madison,” I read some, and they hated it. I was like, “Whoa. What the hell is happening, man? I thought they were going to be right with me.”

Lawrence: By the way, every time I’m at the pool in the summer with my friends, we always say, “It’s too damn hot for a penguin just to be walking around.”

Sandler: Thank you. I wish you wrote some of these reviews.

Lawrence: It’s so bizarre, because you’re so in the zone. You put your whole soul and body — you move to shoot a movie, you do all of this. You love it, obviously. You wouldn’t be there if you didn’t love it. And then people just destroy it. It sucks.

Sandler: Oh yeah, they come in and try to rip it apart. So I did stop reading them. It didn’t make sense to me, and it screwed my thinking up a little bit. When we were writing the next one, me and my buddy were like, “You think they’re going to hate this if we do this?” And we started saying, “What’s the difference?” Although “Meyerowitz” gets nice reviews.

Lawrence: Great! I just have them emailed to me, so I don’t Google myself. Because you know what I realized with Googling myself? I went on a little tangent a few days ago. Everybody was giving me compliments about [hosting for Jimmy] Kimmel. So I was like, this is a safe time to be bored and Google myself, right? And I was only reading positive things. I probably just Googled “I love Jennifer Lawrence.” It was all positive, and I got slammed with anxiety. It’s not healthy to realize how many people are actually looking and listening to you. That is such a mind fuck.