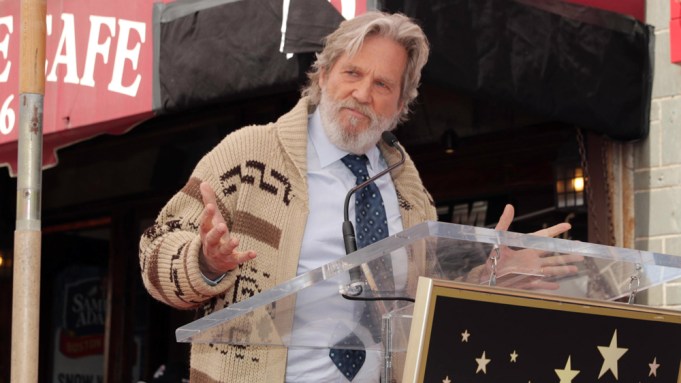 Jeffrey “The Dude” Lebowski was brought back to life on Hollywood Boulevard, but this time, he was the one who delivered a eulogy for a friend, and it ended with “Good afternoon, sweet prince,” rather than good night.

At John Goodman’s Walk of Fame ceremony, Jeff Bridges donned “The Dude’s” signature, quirky, knit sweater, and delivered a typically rambling and hilarious rendition of the eulogy that Walter gives before scattering Donny’s ashes in the 1998 Coen Brothers cult classic “The Big Lebowski.”

Bridges asked Goodman to hold his suit and bag for him, and as he drew out “The Dude’s” poncho-like garment, a loud cheer erupted from the crowd when they realized one of cinema’s most iconic slackers was about to be reincarnated in front of them.

“He’s a good actor, he’s a good man, John Goodman,” Bridges began. “He’s one of us, he loves the outdoors and acting. As a showman, he has explored the stages from Los Angeles to New York — we’re talking Broadway here, man — he’s done some weird little movies, too. And he’s lived, like so many men in prior generations have lived their lives. He is a man of his times, a man of our times, and he has become a legend.”

As Bridges delivered his version of the eulogy, Goodman laughed uncontrollably in the background.

Bridges continued, “In your wisdom lord, you have lived through John as you have through so many other bright, flowering, young actors before him. I’m talking about men like Clark Gable, Gabby Hayes, Roy Rogers — to keep in the whole Western thing — Groucho Marx, Jimmy Cagney. We could go on and on, but you get the idea.”

“In accordance with what we think may be your final wishes, we have committed to these sidewalks in Hollywood — in the bosom of Hollywood that you love so well — a star. A star for you, a star because we love you so well … what time is it? Afternoon? Good afternoon, sweet prince,” Bridges concluded, changing the film’s most famous line to reflect the ceremony’s time of day.

The heartwarming, poignant moment continued after Bridges finished, as the actors knelt at each other’s feet, before rising to warmly embrace.