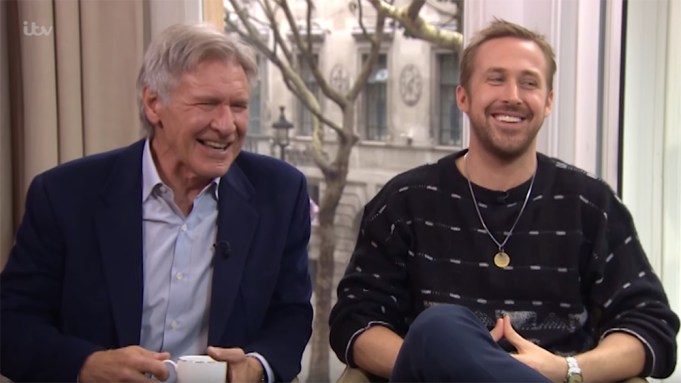 Journalist Alison Hammond begins by telling the stars about the special liquor glasses she brought in “because these were from the original ‘Blade Runner'” and she wanted to please fans with her attention to detail. “That’s so cool that you did that. Are you a fan of the original?,” Gosling asked. “Never seen it,” she cackled, thus inciting a storm of laughter that had all three drinking up from those glasses throughout the unconventional interview.

At one point, the interviewer asked Ford what his initial reaction was to the call he received asking him to star in a new “Blade Runner” film. “‘So what?,'” Ford laughed and joked that he responded, “Show me the money!” For a brief moment, he returned to reality: “No, I said, ‘Show me the script.'” But it wasn’t long before he reached for another drink and kept the laughs coming. Ford and Hammond were building such a rapport that she had to pause and ask, “Should we talk to Ryan?”

When she did talk to Gosling, they joked around about his sweater before he resorted to pointing at the crew and asking, “Do you guys need help with the cameras?” He walked away for a moment before returning for more ridiculousness, but by the end of the interview, again overwhelmed with giggles, walked offscreen after literally dropping the mic.

Watch the hilarity ensure above.