The Greatest Geek Moments of 2017 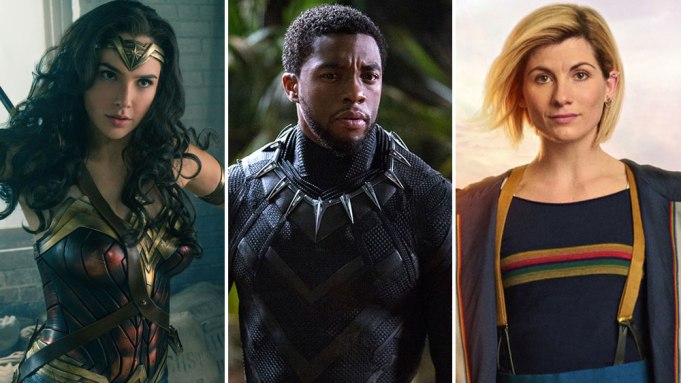 The year of 2017 was a great year for geekdom. Women took center stage thanks to films like “Wonder Woman” and casting change-ups from BBC’s “Doctor Who.” And plenty of classic fan favorites returned (if even for a moment) such as “Twin Peaks,” “Samurai Jack” and even The Dude. Here are our favorite standout genre moments that had us geeking out and getting a little misty-eyed.

The Winchester brothers opened the “Supernatural” panel at San Diego Comic-Con with a surprise performance of “Carry On Wayward Son” by Kansas. The rock anthem has played in every season finale for the series, evolving into a makeshift calling card for the fandom. But only at Comic-Con do rock stars open for demon hunters.

When “Stranger Things” star Shannon Purser surprised the Duffer brothers at their Comic-Con presentation, the creators had to make good on their promise to deliver “Justice for Barb” in the second season. No thanks to dad bod heart throb David Harbour, who unceremoniously popped the fandom’s bubble by stating that Barb would not be returning to the new episodes. However, justice was both hinted at and (spoiler alert) eventually delivered. RIP Barb.

After a two-year hiatus, the hit animated television show returned, with a premiere on April Fool’s Day, and included a reference to the McDonald’s Szechuan dipping sauce that was released in 1998 to promote Disney’s “Mulan.” Though McDonald’s seized the opportunity and revived the sauce for an extremely limited one-day run, the event was handled poorly (on both sides). Many participating stores never got shipments or claimed not to even know about the promotion. In the frenzy to try the sauce, thousands of fans nationwide flocked to McDonalds, including some who paid hundreds of dollars for a single packet and one fan who traded their car. Because sometimes when you win, you lose. The fast food restaurant later announced it would bring the sauce back nationwide.

The 2003 animated series “Samurai Jack” was resurrected this year for a final season. Now on the Adult Swim programming block, the show was free to depict more violence and explore darker themes. Though the series’ bittersweet ending divided fans and was criticized for feeling rushed, creator Genndy Tartakovsky stood by his decision and said that while the finale could have been longer, he is proud of how the story ended.

To honor his “Big Lebowski” co-star John Goodman, Jeff Bridges busted out the Dude’s iconic sweater for the Hollywood Walk of Fame Ceremony.

“Game of Thrones” had an insane year of ice dragons and awkward hookups. However, the moment that truly brought all fans together wasn’t the fiery loot train attack, it was Leslie Jones’ recaps. The “Saturday Night Live” comedian’s GOT live-tweets hit zenith levels when “Late Night with Seth Meyers” surprised her with a cameo from Lord Varys (Conleth Hill). It was everything we could have dreamed, especially when she called the actor out for his shady dealings.

4. “Doctor Who” announces Jodie Whittaker as the next Doctor

The 37th season of BBC series “Doctor Who” will finally regenerate the lead into a woman. After twelve official Doctors spanning decades of television, the series announced that actress Jodie Whittaker had been cast as the first-ever female Doctor.

After 26 years, David Lynch and Mark Frost’s eternally popular murder mystery drama “Twin Peaks” returned to for a third season. Though the show received high praise, fans should not hold their breath for a fourth season as David Lynch shut down rumors, saying “there’s nothing to talk about.”

2. “Black Panther” cast sees their footage for the first time, flips out

The big standout moment from the 2017 San Diego Comic-Con wasn’t surprise cameo, an exclusive trailer or even a geeky giveaway. The greatest geek moment from the epic genre fest was delivered thanks to a shocked “Black Panther” cast. Gathered in front of the crowds of Hall H, the crew couldn’t help but react with sheer joy after a reel of never-before-seen-footage screened. It’s so rare that the fans get to share something with those that actually make the content, but honestly it seemed like the cast was having an even better time than their audience.

Gal Gadot and Patty Jenkins reclaimed time for women heroes at the start of the summer with “Wonder Woman.” The box office smash not only demonstrated that an action film directed by a woman could make significant cash, but that a woman-fronted superhero picture could connect with fans (and critics). But even bigger than dollar signs or accolades was the impact the representation had for fans everywhere. And that reality was reflected at Comic-Con when the littlest Wonder Woman shared an emotional moment with the real life star.