Gabourey Sidibe on How She Found Her Voice as a Director 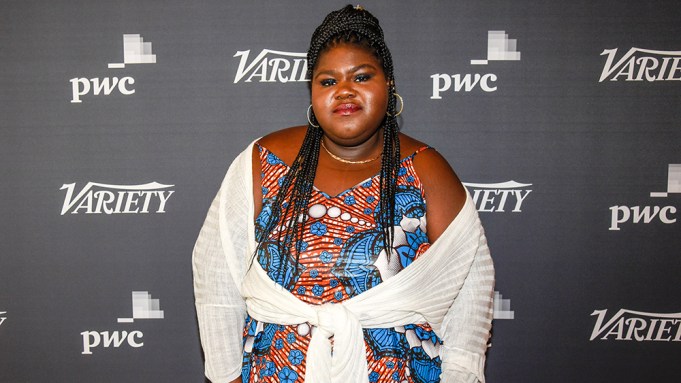 Gabourey Sidibe, the Oscar-nominated star of “Precious,” didn’t think she wanted to direct. So when Refinery29 approached her about making a short film, as part of an initiative to encourage young women filmmakers, she tried to turn them down.

“I was like, ‘No thank you,'” Sidibe said at an interview at the Variety Studio in Cannes Lions this week. “I think there’s a woman thing. I didn’t think I was smart enough or good enough or that my voice was thorough enough to direct something. I’d never thought about it until I got that opportunity.”

She was eventually convinced by a producer friend to try. Her short film, “The Tale of Four,” based on a Nina Simone song, debuts at the Nantucket Film Festival this weekend. Sidibe spoke to Variety about making it, what she’s learned about herself, and why she wants to play Batman in a comic-book movie.

How did you like directing?
It turns out my voice is good enough and important enough and is also missing, which is why this program is important. I didn’t believe in my voice, because I didn’t really have space for it. And now I’m just a better person. It’s not about being a better artist or better filmmaker. I realized my own completeness, my own wholeness, through Refinery.

Will you direct again?
I’ll direct the rest of this [interview]. I’ll direct anything. I’m going to be out in the street directing traffic soon. All direction is, is opinion. The freedom in being able to choose is wonderful. I’m addicted now. I want to direct more short films. I want to direct television. The greatest thing is now that I do believe in my own voice, I can do anything; I can make anything. I’m going to stretch my own imagination farther than I ever thought it could. So yeah, I’ll be directing more for sure.

The statistics are still low for female directors. What barriers do women face to becoming a director?
Doubt. I think it’s just people don’t believe, “Oh, well she can’t do it, let’s go to the closest mediocre man.” That doubt isn’t always coming from other people. My doubt came from inside me. That’s been my biggest hurdle. I see it in a lot of other females no matter what they are doing in life. Your own self-doubt stops you from reaching your potential.

The studio system doesn’t feature very many diverse voices. Have you been frustrated by the kinds of movies Hollywood is making?
Absolutely. It’s kind of like we only make these kinds of things because that’s what the audience is. It cuts off the rest of the world. We’re not telling the story because nobody needs it. No, no, I’m here. I’m the audience. Unfortunately, in today’s society, you don’t know you exist unless you see yourself in media. That’s not necessarily a bad thing because it will push the artist who is a different color or gender, if you don’t see yourself, you have to figure out a way to make yourself be seen. We can do that in a lot of spaces from YouTube to Instagram. That proves the audience is there. The studios don’t believe the audience is there. So we have to keep making independent films in a bigger, more obvious way so they see we do exist, we do count and we will spend money.

Would you like to be in a superhero movie?
I would. Yeah. Here’s the thing: I’m a bada– and so I really love whenever I have to do action scenes. When I was in “American Horror Story,” there was a scene where I was a human voodoo doll, where I get shot in the stomach and I crawl on the ground and I’m bleeding and there’s a trail of blood behind me and I grab a gun and I put the gun in my mouth. I felt so cool. I feel cool describing the story now and this is from four years ago.

Who would you want to play?
I really like Amanda Waller [from the “Suicide Squad” comics] who is a lawyer and can also stretch herself. That’s so dope. God, also I want to fly so why can’t I play Superman? Also, Batman! Here’s the thing about Batman. Batman doesn’t have any superpowers. He’s not an alien, he’s a straight up human who happens to be rich. He’s like white privilege man. He’s got all these tools and stuff and he has a super dark sense of being — he’s such a creep. I feel like I’m Batman, because I’m such a creep.

You should tell Ben Affleck you’re taking over.
He can sit down. Take a break, Ben.

There’s been a recent conversation about disparity of opportunities for women in the film industry and what needs to change.
My story is quite different. It’s been quite amazing to be a young woman in Hollywood. The strange thing about that conversation is it’s been going on for a while, but it feels new and faddish. Women have been around just as long as men have been around. It’s half our population. I don’t understand why we’ve been so discounted for so long. Or who are the people in charge of making sure their foot is on our neck? But those days are over with directors like Ava DuVernay and Patty Jenkins, who is dope. I think we are getting louder and stronger. The real difference is the money. “Wonder Woman” is making a ton of money, and that’s the way Hollywood sees anything of worth. I feel like that’s changing, and that’s going to turn the industry on its ear: if we can show up and show that we are worth the money. Ava DuVernay is the [first female African-American] director of a $100 million dollar film with “A Wrinkle in Time.” But point out a guy that doesn’t have that much money [for a budget]. I was in a Brett Ratner movie for $100-plus million, “Tower Heist.” I was like, “What is this!?” We were wasting money all the time. But every female director I have ever worked with always comes under budget and under time. You almost have to be sleeker, faster, and smarter to prove you’re worth half of what they are getting.

It also feels like Trump has made it more important for women to tell their stories.
Absolutely. You have to be able to see yourself in order to know that you exist. Being more visible and more strong as a female is part of the resistance, and we have to resist in Trump’s America.

How did working with Lee Daniels in “Precious” change your life?
In every single way. I was a broke college student who worked in an office before meeting Lee. Lee was the first person who was part of Hollywood who looked at me and saw me in my entire body and my skin color and my bigness and my smallness and my insecurities and my inexperience and saw beauty. He’s the first person who ever said yes to me. Every yes I’ve ever gotten for the rest of my career comes from Lee’s first yes. And so I’m very grateful to him, and I have to give him my kidneys when he needs it. He’s family. I still work for him because he’s the creator of “Empire.” He’s always going to be ever present in my life.

Why do you think he said yes to you?
He used to do a lot of drugs. I’m kidding. I think that there is beauty in what we don’t let be beautiful. I think Lee sees the dirt that the flower grows from. He sees the potential is the art. I was just some rough-edged young girl from Brooklyn and Harlem. I was a phone sex operator; it was a whole thing, I was grimy. He saw my potential, he said yes and he said, “I’ll work until you see your potential.” I remember he was saying, “No, you have to be a star now.” He would say watch Halle Berry in interviews. Look, I’ll never be Halle Berry, but he saw what I could be and he saw what I eventually saw that I am.