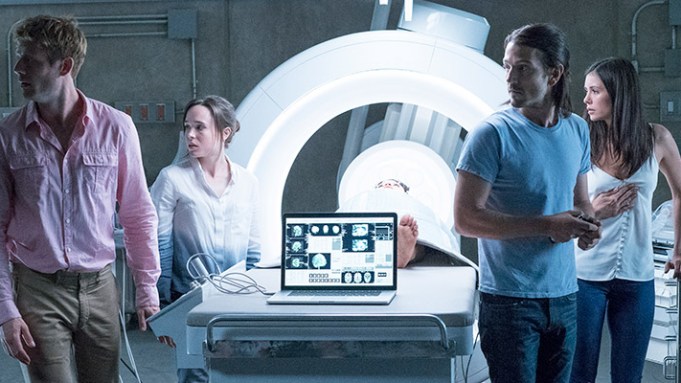 Ellen Page and Diego Luna’s push into the afterlife backfires big time in the first trailer for Sony’s “Flatliners” remake.

Page plays a medical student who joins four of her classmates — Luna (“Rogue One: A Star Wars Story”), Nina Dobrev, James Norton, and Kiersey Clemons — in post-midnight experiments of stopping their hearts for short periods of time to get first-hand glimpses of the afterlife. The initial forays seem pleasant enough, but the afterlife seemingly bites back with increasingly disturbing images, based on their sins from the past, and begins intruding their everyday lives.

The word “murderer” appears at the bottom of a pool while one character is swimming. Page’s character sees a car tumbling off a rural bridge into a river and cries “I’m going crazy,” and Luna declares, “This experiment needs to end.”

“Flatliners” is directed by Niels Arden Oplev from a screenplay by Ben Ripley based on a story by Peter Filardi. The producers are Laurence Mark, Michael Douglas, and Peter Safran.

Douglas produced the original 1990 “Flatliners,” which starred Kiefer Sutherland, Julia Roberts, Kevin Bacon, Billy Baldwin, and Oliver Platt as medical students exploring near death on the examination table until the consequences began to jeopardize their lives.

The film, from Columbia Pictures in association with Cross Creek Pictures and LStar Capital, will be released on Sept. 29.