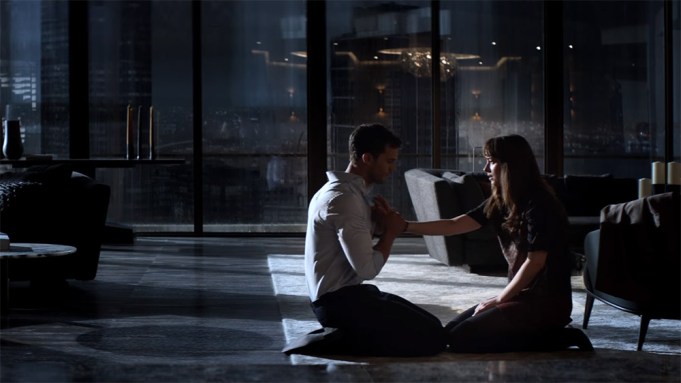 If any “Fifty Shades” fans were watching Nick Viall embark on his quest to find true love on “The Bachelor” premiere on Monday night, they got a special treat from Christian Grey.

An extended trailer for Universal’s “Fifty Shades Darker” dropped during the ABC show’s season premiere, showing more steamy footage from the sequel. In it, Christian’s (Jamie Dornan) trying to get Anastasia Steele (Dakota Johnson) back, and she even agrees to dinner — but only because she’s hungry.

“This time, no rules,” says Anastasia. “No punishments, and no more secrets.”

It does indeed, however, get a lot “Darker” when a mysterious woman starts to appear, and Anastasia begins questioning rekindling the flame as sexy shower scenes make way for gunplay. Taylor Swift and Zayn Malik’s “I Don’t Want to Live Forever” provides the soundtrack.

“Every fairy tale has a dark side,” the trailer’s tagline warns.