‘Fate of the Furious’: ‘The Game Has Changed’ in New Trailer 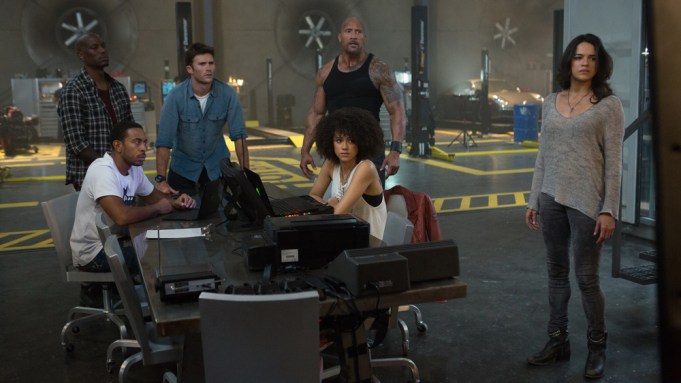 “This crew’s about family, but the game has changed now.”

Those are the last words Dwayne Johnson’s Luke Hobbs says before his friend-turned-foe Dom Toretto (Vin Diesel) and mysterious manipulator Cipher (Charlize Theron) blow out a wall in the family’s office in the latest trailer for “The Fate of the Furious.”

The eighth installment pits Dom against his allies and wife (Michelle Rodriguez), as he’s coerced into a life of crime by Cipher after the crew retired and was exonerated in the previous film. As seen in the trailer, Dom says he’s “got not choice” but to help Cipher enact mass “high-tech terrorism” against New Yorkers.

Cars go flying, self-driving out of buildings and into other vehicles, controlled by Cipher in a plot to unleash total chaos. The trailer is action-packed, showing Hobbs diverting a torpedo in the arctic with — you guessed it — his bare hands. Hobbs is also forced to work with his old enemy Deckard Shaw (Jason Statham) to bring down Dom and Cipher, partnering in a prison sting together.

2015’s “Furious 7” was the last film to feature Paul Walker, who died in a car crash during filming. “Fate of the Furious” will be the first movie in the franchise not to feature Walker since 2006’s “Fast and the Furious: Tokyo Drift.”

Theron joins other newcomers Helen Mirren and Kristofer Hivju, while Tyrese Gibson and Ludacris return to their roles of Roman Pearce and Tej Parker, respectively. F. Gary Gray comes on as director, known from films “The Italian Job” and “Straight Outta Compton.”

“The Fate of the Furious” hits theaters on April 14. Watch the trailer here or above.