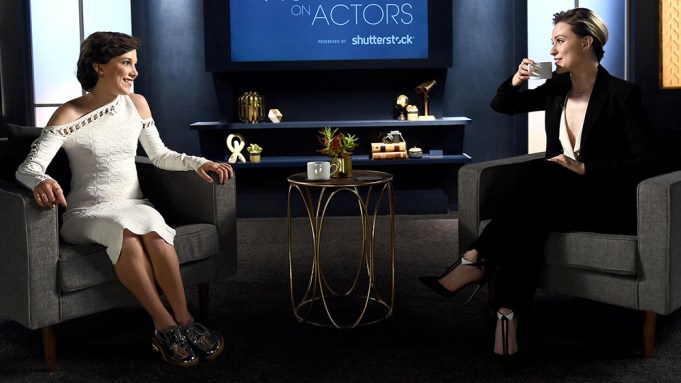 Wood said, while talking with Brown on Variety‘s “Actors on Actors,” that the piece of advice originally came from Selma Blair. During the interview, the “Stranger Things” and “Westworld” stars discussed how to handle criticism.

Brown said she gets plenty of advice from random people, and asked Wood for her sage advice.

“Make sure you love what you do. Be an actor not because you want to, but because you have to, because it’s your passion,” she said. She continued that it becomes more difficult as one gets older because the criticism comes more frequently and critics are able to hide behind the anonymity of the internet.

“The best advice someone ever gave me, and it’s Selma Blair, and she said, ‘Don’t ever read message boards. It does you more good to lick a toilet seat than to read the nasty things that people say about you.’ Lick a toilet seat before you listen to the nasty people that, you know, just want to anonymously poke fun,” she told Brown.

Brown agreed that reading comments online can be futile, but also had a different take on how to interpret the comments.

“If you look at the message boards and the insults and things, it just makes me stronger,” she explained. “That is like compliments to me. I’m playing on their minds, clearly. So that’s my mentality, I never really take it personally because I think. … I clearly annoy them, I made an impression.”