‘Captain Underpants’ Is Born in First Trailer for Movie Adaptation 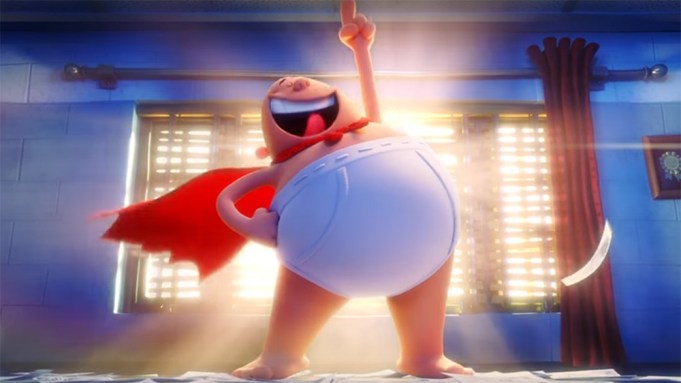 “He doesn’t have X-ray vision, he can’t even climb a tree — wearing a cape does not make him a superhero,” says Hart in introducing the trailer with Helms. “Yes it does!” protests Helms.

Based on the book series of the same name, “Captain Underpants” centers on a pair of elementary school pranksters who aggravate their principal to the point that he moves to separate them into separate classes, vowing, “I’m going to annihilate your friendship.”

But the duo then manage to hypnotize the principal into believing he’s a seriously stupid superhero: “When I snap my fingers, you will obey my every command. You are now the amazing Captain Underpants!”

At one point, Captain Underpants — voiced by Helms — takes on an inflated monster, evoking the comment from Hart, “Wow — he is super-dumb.”

Captain Underpants also takes on a mime, saying, “You’re trapped in some kind of invisible box — I will set you free,” and punches the mime.

David Soren is directing from a script by Nicholas Stoller. Other voice actors include Nick Kroll as Professor Poopypants and Jordan Peele as the tattletale Melvin Sneedly.