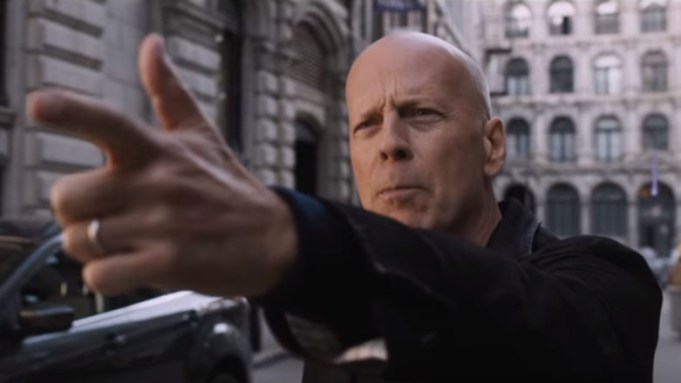 Make no mistake. Bruce Willis doesn’t play a cop in the upcoming action film “Death Wish,” but rather a trauma surgeon who takes matters into his own hands after his wife (Elisabeth Shue) and college-age daughter (Camila Morrone) are viciously attacked in their suburban home.

“Somebody has to do it,” he quips in the teaser.

Director Eli Roth’s remake of the 1974 revenge thriller from the novel by Brian Garfield is set in Chicago, where police are overloaded with crimes. Set to AC/DC’s “Back in Black,” the trailer shows Dr. Paul Kersey (Willis) use his surgeon skills to identify criminals and take revenge on a crusade for justice to avenge his wife’s death.

The anonymous slayings of criminals are grabbing the media’s attention, leaving the city wondering if the hooded vigilante killer is a guardian angel or grim reaper.

“Is he right for taking the law into his own hands?,” asks radio host Sway in the trailer. “He’s become a folk hero,” remarks another commentator in the footage.