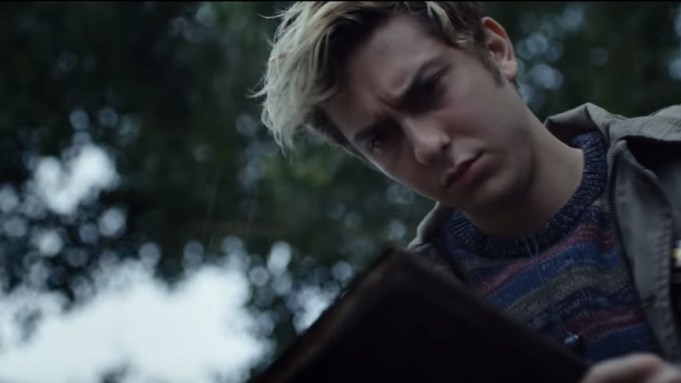 The latest trailer for Netflix’s live-action “Death Note” movie was released on Thursday, giving fans of the hit manga and anime the first look (kind of) at Willem Dafoe’s Ryuk.

In the trailer, Light Turner (Nat Wolff) stumbles upon the Death Note, a journal in which he can write anyone’s name and kill them at any time and in any fashion he wants. It belonged to Ryuk, a shinigami or “death god,” voiced by Dafoe, who explains the Death Note to Light… and then watches the chaos unfold, as Light decides to take justice into his own hands by killing criminals.

The trailer also gives anther look at Lakeith Stanfield‘s L, the genius detective who embarks on a mission to stop Light. The new footage also features Mia (Margaret Qualley), who encourages Light to use the journal.

Adam Wingard (“You’re Next,” “The Guest,” “Blair Witch”) directs the adaptation of Tsugumi Ohba’s manga series. When the first trailer was released back in March, it swiftly drew criticism for whitewashing, the practice of casting white actors in roles meant for actors of color. The Americanized version takes the story from Japan to Seattle — characters like Light Yagami and Misa Amane become Light Turner and Mia Sutton.

Producer Roy Lee responded to the criticism in an interview with BuzzFeed in April, calling the backlash “somewhat offensive.” “I can understand the criticism … if our version of ‘Death Note’ was set in Japan and [featured] characters that were Japanese-named or of Japanese ancestry,” he said. “But that’s not the case.”

“Death note” will hit Netflix on Aug. 25. Watch the trailer here or above.