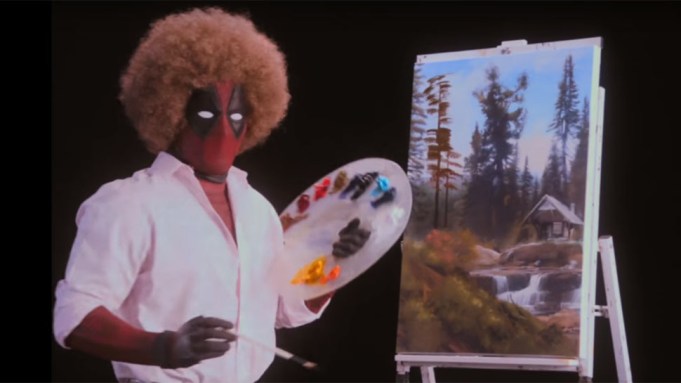 Ryan Reynolds takes a turn into the surreal in a teaser trailer for “Deadpool 2,” offering mostly tips on how to paint — intercut with a few brief action scenes.

Deadpool imitates Bob Ross, the late artist from PBS’ instructional show “The Joy of Painting” who provided extensive detail about what he was painting, in a video titled “Wet on Wet.” At one point, Deadpool explains that he’s painting trees, then adds, “What you don’t want to do is eat these — trust me on this.”

About halfway through, however, several characters appear briefly in a violence-laden montage from the actual movie — Josh Brolin’s Cable, Negasonic Teenage Warhead (played by Brianna Hildebrand), and Blind Al (Leslie Uggams). Then the trailer returns to the painting instructional with Reynolds concluding, “Hugs not drugs.”

Reynolds is also a producer on the films with “Deadpool” writers Rhett Reese and Paul Wernick returning, along with Drew Goddard assisting. “John Wick” co-director David Leitch came on board to lead “Deadpool 2” last fall after Tim Miller dropped out due to creative differences with Reynolds. The superhero sequel also stars “Atlanta” breakout Zazie Beetz as the mutant mercenary Domino.