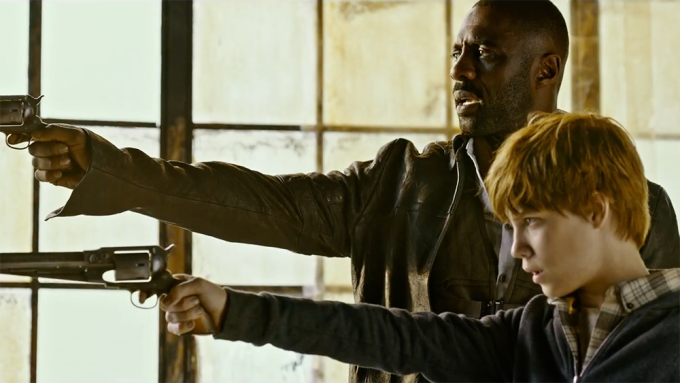 Idris Elba and Matthew McConaughey play bitter enemies in the first trailer for “Dark Tower” — an adaptation of the Stephen King series of the same name.

“For thousands of generations the gunslingers were knights sworn to protect us from the coming of the dark,” Elba huffs in a voiceover at the beginning of the trailer.

Tom Taylor plays a young boy who is taken in and trained by Elba’s character Roland Deschain or “The Gunslinger.” The two face the threats of McConaughey’s Walter Padick, also known as “The Man in Black.”

Danish filmmaker Nikolaj Arcel directed the movie which, from the looks of the trailer, should include plenty of slow-motion action sequences and snorted dialogue about justice and humanity. A crew of writers, including Arcel, worked on the script — Akiva Goldsman, Jeff Pinkner, and Anders Thomas Jensen also have credits. The film is co-financed by Sony and MCR.

McConaughey and Elba played up the trailer’s arrival by posting teasers on Tuesday in a dramatic exchange. “You want the Tower?” McConaughey tweeted at Elba. “To find the tower is my purpose. I’m sworn,” the co-star responded.

See the Twitter exchange between McConaughey and Elba below:

.@idriselba You want the Tower?

To find the tower is my purpose. I'm sworn.

Then as the world’s last crusader don’t break your promise… you’re closer to the Tower than you know.

You know nothing of me.