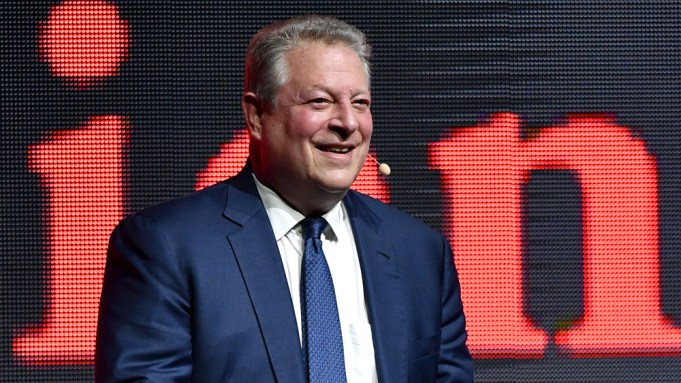 The former vice president revealed presented the trailer during the Paramount presentation and was warmly received by the audience. “An Inconvenient Sequel: Truth to Power” opens July 28.

Released in 2006, “An Inconvenient Truth” was a solid performer for Paramount with nearly $50 million in worldwide grosses. “The power of entertainment to inform us has made us more socially aware,” Gore said Tuesday.

Reminiscent of the original, “An Inconvenient Sequel” depicted the dire consequences of a warming earth — from flooding in Miami and the Philippines, to the worst drought on record in Syria — bringing human suffering there that predated the ongoing civil war — to air pollution so bad in some parts of China that life expectancy has declined by six years.

The documentary, produced by Participant Media, kicked off this year’s Sundance Film Festival, where it was met with overwhelmingly positive reviews.

The trailer starts with then-candidate Donald Trump joking about global warming. Later in the trailer, a hopeful Gore says there are positive developments, such as solar panels and other renewable energy sources. It also documents his trip to 2015 United Nations Climate Change Conference in Paris.

His message is in direct opposition to that of President Trump, who called to eliminate the Environmental Protection Agency and cancel billions of dollars in climate change spending.

The timing of the trailer couldn’t be more perfect; President Trump issued a sweeping executive order on Tuesday rescinding many of the climate change regulations introduced by President Barack Obama, including reducing carbon emissions and lifting the moratorium of mining coal on federal lands.