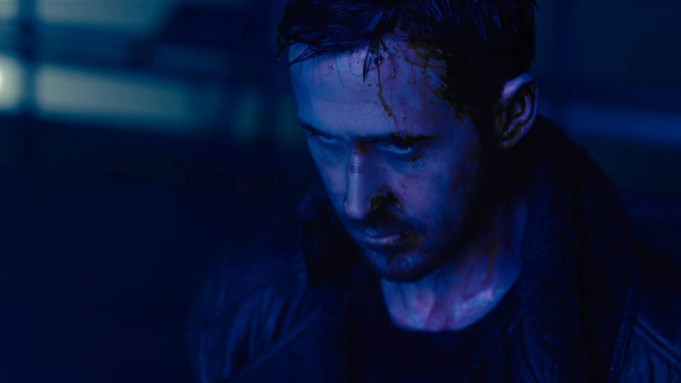 The Los Angeles event also included a Q&A with the trio.

“The first film made me question what it meant to be a human being,” Gosling said about the original 1982 movie, directed by Ridley Scott.

Ford return as Deckard — now an ex-LAPD blade runner — in the second installment.

“It’s very interesting visiting a character after some time. … It was a very gratifying experience,” he said at the event.

This trailer follows the first teaser for the film, which was released in December, as well as footage shown at CinemaCon in March.

The explosive trailer opens with another look at Jared Leto’s baddie, a manufacturer of replicants who suffers from a messiah complex. He caresses a just-born, naked android in one shot — the newest addition to a “disposable workforce.”

There’s also a glimpse of Robin Wright’s mysterious character, who wants to maintaining a world separated by kind. “There is an order to things. That’s what we do here,” she says.

Another enigma? Ana de Armas’ character, who appears to be Gosling’s love interest. “I always told you you were special,” she tells Officer K in the new trailer.

The sequel is set 30 years after the events of the original movie. Gosling plays Los Angeles Police Department Officer K, the new blade runner who unearths the key to the future. He embarks on a quest to find Deckard, who has been missing for three decades.

Hampton Fancher and Michael Green wrote the screenplay, which follows the initial story by Fancher and David Peoples, based on Philip K. Dick’s novel “Do Androids Dream of Electric Sheep?” Scott’s original movie — set in Los Angeles in 2019 — followed Deckard, who pursued replicants that had escaped from an off-world colony.

Frank Giustra and Tim Gamble of Thunderbird Films will serve as executive producers alongside Scott and with Bill Carraro.

Sony Pictures is co-financing the movie with Alcon Entertainment and will distribute it overseas. “Blade Runner 2049” hits theaters on Oct. 6.

Here are new photos from the film: