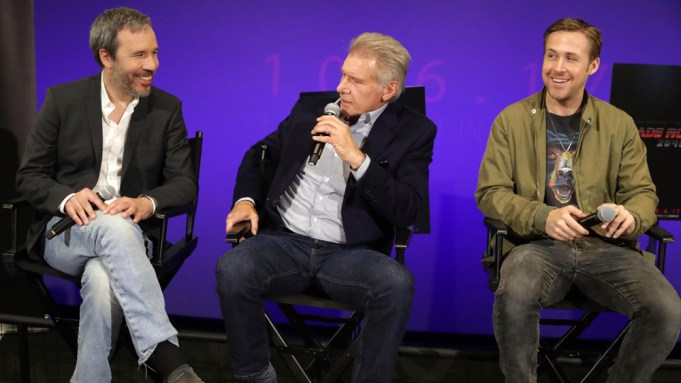 Harrison Ford has had a career resurgence of late, playing characters he made iconic three decades ago.

The veteran actor reprises the role of Rick Deckard in the upcoming “Blade Runner 2049,” and spoke about returning to the role 35 years later.

“I think it’s interesting to develop a character after a period of time — to revisit a character,” Ford said during a preview event at Imax headquarters in Playa Vista, Calif. It was a very interesting working with Denis [Villeneuve], working with Ryan [Gosling]. It was very gratifying experience.”

“The character is woven into the story that intrigued me,” Ford added. “There’s a very strong emotional context; the relationship between Deckard and other characters I found fascinating.”

Ford was also asked about re-entering the world of “Blade Runner,” a neo-noir aesthetic later adopted by films like “The Matrix,” “Minority Report,” and “Children of Men.”

“I think it’s fascinating that the original film postulated a technology in may ways that we’ve surpassed, and in other ways, we’re not quite there. This film takes into account the thirty years that have passed. It references technologies that actually are in place now, and also — to me which is more interesting — acknowledges and deals with some of the ethical considerations technology presents us with,” Ford explained.

Ryan Gosling, who plays a police officer K., described doing the sequel to the iconic film as “surreal.” Gosling had seen the original the first time about 10 years after its debut.

“Because I was young, it was one of the first films that I’d seen [where] it wasn’t clear how I was supposed to feel when it was over. It made me question what it meant to be a human being. It made me question my ability to recognize the hero from the villain. It was this nightmarish vision of the future but presented in a romantic, dreamlike way. It was very haunting,” Gosling explained.

Although Denis Villeneuve takes over the directing from Ridley Scott, Scott is still on board as executive producer. Roger Deakins, who’s worked with Villeneuve on “Prisoners” and “Sicario” — as well as films like “Kundun” and “A Beautiful Mind” — shares his vision for “Blade Runner 2049.”

Villeneuve said Deakins “went wild” on the sequel, describing it as “impressionistic.” “Honestly, it is his most stunning work.” Deakins stunning cinematography was then presented in the brand new trailer for “Blade Runner 2049,” which you can see here or above.

You can also watch the entire Facebook Live with Ford, Gosling, and Villeneuve here.