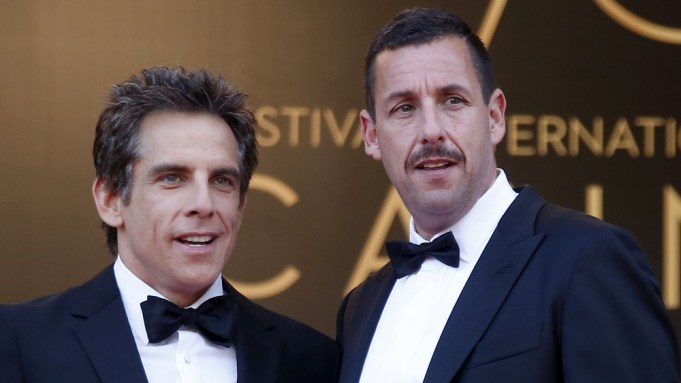 The cast of “The Meyerowitz Stories (New and Selected)” weighed in on the ongoing Netflix-Cannes controversy — a small facet of the larger friction between traditional studios and streaming services — in an interview with Variety at the Cannes Film Festival on Monday.

Ben Stiller and Adam Sandler, who play half-brothers navigating the dysfunction of their family in the film, said if the studios are unhappy with Netflix making inroads on their territory, they have no one to blame but themselves.

“I don’t know why the studios have become so adverse to making interesting films and taking chances,” Stiller said. “I guess it’s about money. These studios are owned by big conglomerates and they’re not independent studios making films. They have a huge profit margin, so they make movies that can make a lot of money. Unfortunately, that means the really good interesting movies aren’t getting made.”

Sandler said working with Netflix Chief Content Officer Ted Sarandos creates a “cool feeling,” because he comes across as a fan of film, rather than just a businessman. Stiller agreed, elaborating that Sarandos is a “creative,” who reminds him of the types of people who ran studios back in the day.

“Now, studios are not headed by people who have that appreciation for creativity,” he said.

Dustin Hoffman and Emma Thompson, who play the patriarch of the Meyerowitz clan and his far-younger, fourth wife, respectively, also put their two cents in. Hoffman disagreed that Netflix has changed the industry and said that instead, “the industry changed, and they got on in the first act of the change.”

Thompson stressed that streaming services won’t take business away from theaters, likening it to the expectation that Amazon’s Kindle was going to make physical books obsolete, which it hasn’t.

“People will make art, and we’ll watch in different ways, that’s for sure,” she said. “But it’s not going to kill going to the cinema.”

Noah Baumbach’s “The Meyerowtiz Stories (New and Selected)” premiered at Cannes after Netflix acquired distribution rights in April, despite facing review from Cannes officials as a result of an outcry from French exhibitors due to the films’ lack of a theatrical release. It will compete for the Palme d’Or — the highest prize awarded at the festival.

Watch the interview above or here.