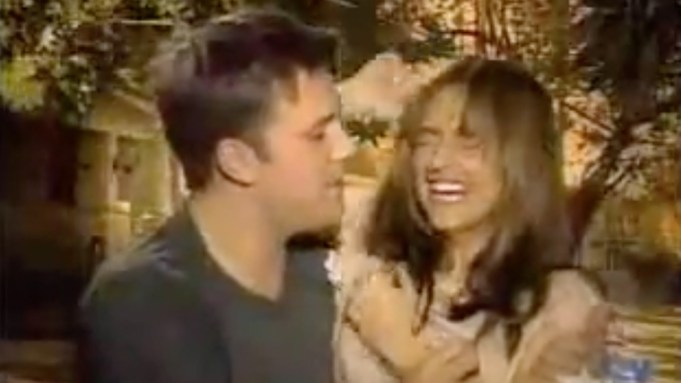 In light of actress Hilarie Burton reviving her claim that Ben Affleck groped her while she was a VJ on MTV’s “TRL” in 2003, another bizarre video has resurfaced of the Oscar winner fondling a different TV host.

Footage dating back to 2004 shows the “Batman” actor touching Anne-Marie Losique’s breast. She was then a reporter for Montreal’s entertainment news show “Box Office.”

In the video — from a press junket for Miramax’s 2004 flop “Jersey Girl” — the TV personality sits on the actor’s lap as he asks, “They would like it better if you did this show topless, the station, wouldn’t they?”

He then lifts and turns her in his lap so she’s facing the camera. “We could do the interview like this,” he says, embracing her tightly and nestling his face on her chest. “That’s a lovely perfume you have on,” he says, repeating an earlier comment.

“You usually show a lot more cleavage than this. What’s the story? Why are you covering it up today?” he presses.

When Losique responds that it’s “Sunday morning,” he insists, “that never stopped you before from getting them ti-ties out. Who you trying to fool, ‘Sunday morning’? You could be in church, you should have that rack on display.”

“These breasts are really firm, suspiciously firm … they are like two giant stones,” he adds.

He appears to twist her nipple at one point and ask if she’d like to create a “Janet Jackson” stunt, alluding to the pop star’s infamous nipple-slip at the 2004 Super Bowl. “Are you wearing your nipple ring?” he asks.

Throughout the video, Affleck, who was engaged to Jennifer Lopez from 2002 and 2004, appears to be slurring his speech as Losique giggles in his arms.

Later on in the segment, Affleck makes a joke about disabled people.

“Don’t make me look like I am retarded! I look like I have cerebral palsy,” he says in a mock French accent. “That maybe offends. We cannot offend — only in America.”

Unlike Burton, Losique has bragged about the encounter in the past.

In a 2001 Los Angeles Times interview — for an article titled “Aboard the USS Ben Affleck” — Losique discussed her habit of sitting on Affleck’s lap during their numerous interviews.

“It’s something that started a long time ago. Now I’m always on his lap,” she told them. “I don’t have to prepare anything. It’s very easy. But I never get to ask him any questions. Never in five years.”

When reached for comment on Wednesday, Losique told Variety that Affleck and herself were just mugging for the cameras.

“We are more open about sexually explicit jokes,” she said of Montreal audiences.

“Humor is nice when it’s uncomfortable,” she added.  “Sometimes it crosses the PC line. As long as the intent is not to hurt anybody.”

Affleck, who was engaged to Lopez at the time, never made any advances off-camera, according to Losique.

Her sizzle reel for “Box Office,” seen below, showcases all her flirtatious encounters with Affleck.

Affleck’s reps did not respond to Variety‘s request for comment.