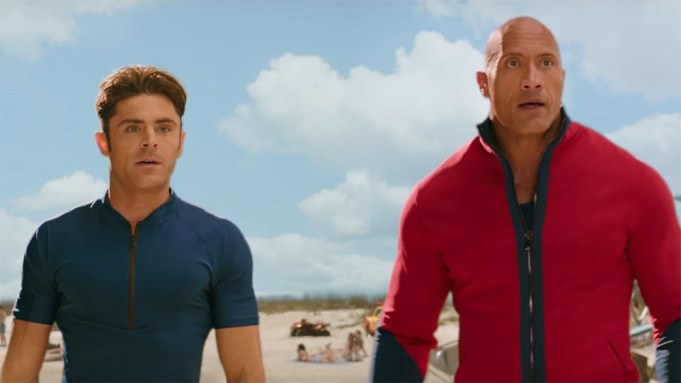 A new set of ultra-toned lifeguards will be hitting the beaches of Los Angeles this summer.

The latest trailer for “Baywatch,” the film adaptation of the hit 1990’s television series, was released Sunday afternoon during the Super Bowl on Fox.

In the film, Mitch Buchannon (Dwayne “The Rock” Johnson), a forthright veteran lifeguard, goes head-to-head with a rash recruit named Matt Brody (Zac Efron). When the two discover that a criminal plot is in the works that is threatening their beach, they are forced to put aside their differences.

In the Super Bowl spot, they get into gear… very revealing gear, that is. When Efron tears off his pants to unleash an American flag-themed bathing suit, Johnson asks him, “What are you wearing?” Efron quickly answers, “Freedom.”

The film also stars Priyanka Chopra, who plays the lead antagonist of the film, along with Kelly Rohrbach playing C.J. Parker, the role Pamela Anderson played in the original television series.

The original “Baywatch” show premiered on NBC in 1989, but was canceled after only one season. Star David Hasselhoff and creators and executive producers Michael Berk, Douglas Schwartz, and Greg Bonann felt the show had potential, and revived it for the first-run syndication market in 1991, through which it garnered large success, especially internationally.

“Baywatch” will hit theaters on May 26.