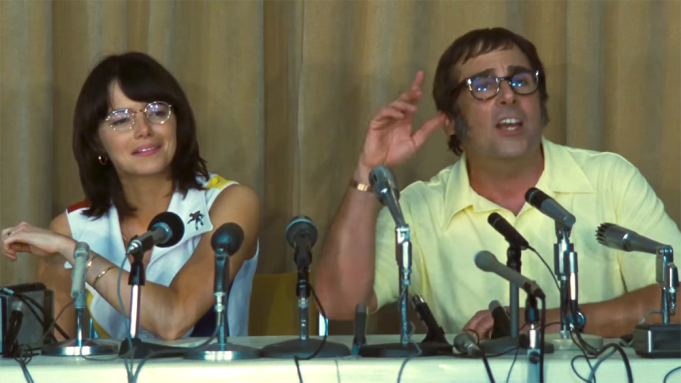 Fox Searchlight has released the trailer for the dramedy “Battle of the Sexes” starring Emma Stone and Steve Carell.

Directed by “Little Miss Sunshine” helmers Jonathan Dayton and Valerie Faris, the film follow the competition between tennis pros Billie Jean King and Bobby Riggs, which captured the zeitgeist back in 1973 when, at 29, the No. 2 ranked King beat the 55-year-old retired former Wimbledon champion.

The trailer highlights include how Riggs treated the promotion leading up to the match as joke, the infamous press conference and King’s love affair with hair stylist Marilyn Barnett.

The footage also shows Riggs disparaging many women, including King. “I’m not saying women don’t belong on the court — who would pick up the balls otherwise?” Carell’s Riggs says.

Later in the press conference, Stone’s King chides, “Keep talking Bobby. The more nonsense you spout, the worse it’s going to be when you lose.”

Danny Boyle is producing under his Decibel Films banner along with Christian Colson and his company Cloud Eight. The pic bows on Sept 22, 2017 and could make a push for a possibly awards campaign given Searchlight’s history.

“Battle of the Sexes” is one of three projects revolving around the infamous tennis match; the other two are HBO and Playtone’s “Proof,” which stars Elizabeth Banks and Paul Giamatti, and Chernin Entertainment and Gary Sanchez’s “Match Maker” with Steve Conrad writing and Will Ferrell attached to play Riggs.

Watch the trailer for “Battle of the Sexes” below: