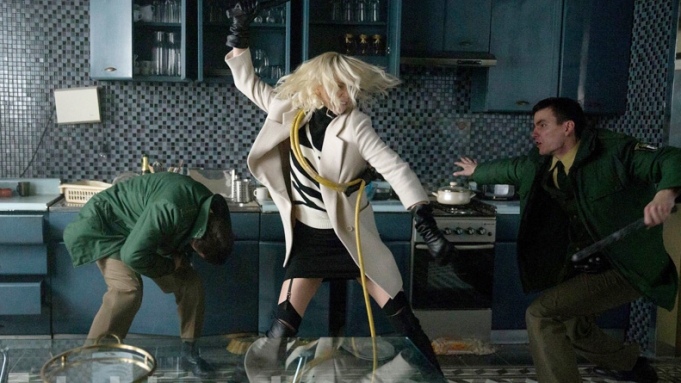 Charlize Theron proves she’s not one to toy with in the first trailer for “John Wick” director David Leitch’s action thriller “Atomic Blonde.”

Theron portrays Lorraine Broughton, a lethal British spy who’s sent to Germany just before the Berlin Wall collapses in 1989. Her mission: target an espionage ring that killed an undercover agent and is suspected of smuggling double agents into the West.

The trailer — released by Universal Pictures on Friday — opens with Theron’s character attaching a wire to her black lingerie then cocking a handgun before suiting up in a trench coat and taking down several men. After kicking a few more butts — as Queen’s song “Killer Queen” plays — she mellows out with an ice bath and some vodka.

Next, Broughton is shown getting intimate in a bar with a female operative played by Sofia Boutella, with whom she shares a NSFW scene with in a hotel room.

John Goodman, who plays a U.S. spy, also stars in the movie, along with James McAvoy, Toby Jones, and Eddie Marsan.

The film will debut at SXSW on Sunday ahead of its arrival in theaters on July 28.