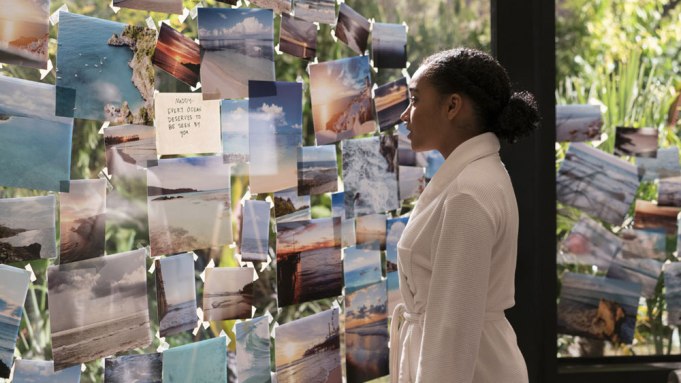 A trailer has dropped for “Everything, Everything,” the first leading role for “The Hunger Games” alum Amandla Stenberg. Based on the book of the same name by Nicola Yoon, Stenberg plays a hermetic illness-struck 18-year-old, kept in her home by her mother (Anika Noni Rose), allegedly for her safety and health.

But, as shown in the trailer, it’s hard to keep a teenage girl from adventure and exploring. Stenberg’s Maddy falls in love with boy-next-door Olly, played by Nick Robinson, as he tempts her with stories and images of a world outside the confines of her home. They text and write notes, using Maddy’s home as a sort of playground for romance. When they finally meet face to face with no glass between them, Maddy realizes she doesn’t want to live in the bubble her mother has created.

“Dear Mom, I know staying in this house keeps me alive, but this isn’t living,” Stenberg’s voice echos in a letter to her mother after Maddy runs away with Olly. The two, kept apart by large bay windows and air filters and helicopter moms, prove that love can be the best medicine after all.

“When I talk to him, I feel like I’m outside,” Maddy says.

Stenberg, an outspoken feminist and activist, is best known for her role as Rue in “The Hunger Games,” a role that launched her career when she was just 14. Most recently, Stenberg starred on Craig Robinson’s canceled TV show “Mr. Robinson,” and rounded out the cast of teens for “As You Are.”

The film is directed by Stella Meghie from a screenplay by J. Mills Goodloe. Alloy Entertainment produces with Victor Ho, Leslie Morgenstein and Elysa Dutton. MGM and Warner Bros. co-produce.

“Everything, Everything” comes out May 19.