‘All Eyez on Me’: Intense New Trailer Delves Into Tupac Shakur’s Story 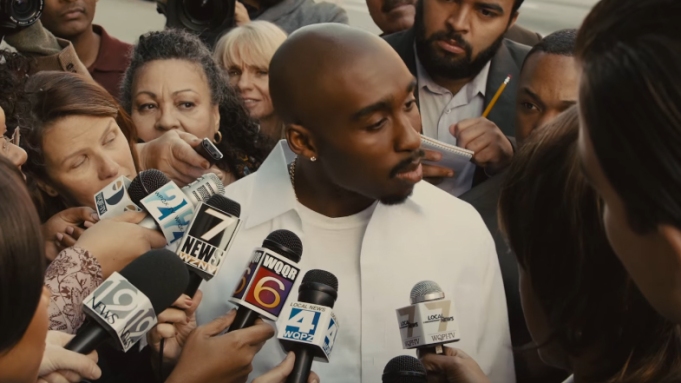 Lionsgate has released a new trailer for Tupac Shakur biopic “All Eyez on Me,” which aims to illustrate the backstory and political beliefs held by the iconic rapper.

Shakur was killed in 1996 at the age of 25. The trailer starts with Demetrius Shipp, Jr.’s Shakur being introduced prior to a performance, then cuts to his revolutionary stepfather Mutulu Shakur (portrayed by Jamie Hector) saying, “You must stand for something. You must live for something and you must be willing to die for something.”

A voiceover by his mother Afeni Shakur (played by Danai Gurira) tells him, “They are going to give you the tools you need to destroy yourself.”

A record executive tells him, “We love your music, Tupac. You paint a picture for the listener that’s not always pretty, but it’s real.”

The cast of the Morgan Creek movie, filmed last year in Atlanta, includes Lauren Cohan, Kat Graham, and Jamal Woolard as friend-turned-rival Notorious B.I.G. “All Eyez on Me” chronicles Shakur’s rise to superstardom as a hip-hop artist and actor, his imprisonment, and his time at Death Row Records.

“All Eyez on Me” is directed by Benny Boom. The film’s title is taken from Shakur’s fourth studio album, which was released in early 1996 and sold 10 million of the 75 million in total sales of Shakur’s albums.

The film is produced by James G. Robinson and David C. Robinson of Morgan Creek Productions, along with L.T. Hutton.

Lionsgate, which is releasing the movie through its Summit and Codeblack labels, has set a June 16 release for “All Eyez on Me,” on what would have been the rapper’s 46th birthday. The studio unveiled the trailer on March 30 at its CinemaCon presentation in Las Vegas.