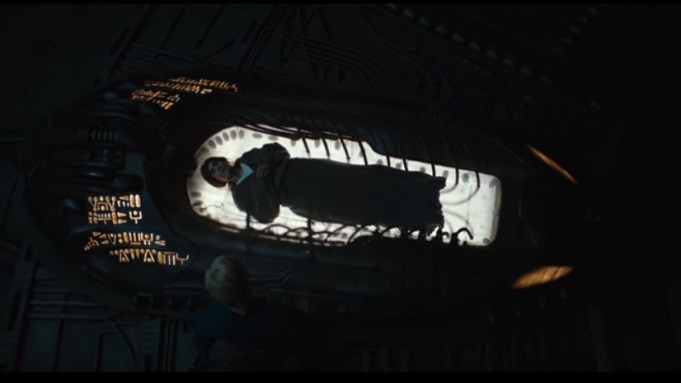 Ahead of the upcoming May 19 release of “Alien: Covenant,” Fox has released “The Crossing,” a short bridging the gap between the end of 2012’s “Prometheus” and the latest installment.

The short, which Fox posted on Wednesday, is narrated by the synthetic droid David (Michael Fassbender) and takes place 10 years after the destruction of the Prometheus. He explains how scientist Elizabeth Shaw (Noomi Rapace), the only survivor of the doomed expedition, helped repair him, forging a bond unlike any he had ever experienced with a human. After salvaging an alien craft, the pair prepared to make a journey onward to meet their creators, the Engineers. The short cuts off just as David looks upon the new world, leaving fans to wonder whether this is indeed the planet of the Engineers.

“Alien: Covenant” sees original “Alien” director Ridley Scott returning to the helm and is the eighth film in the “Alien” franchise overall. It takes place further into the future than “The Crossing,” and follows a crew of pioneers attempting to colonize a seemingly idyllic planet. Their plans for prosperity are cut short, however, when the planet is revealed to be home to monsters similar to the Xenomorphs that plagued the crews of the other franchise films, as well as the original David, the sole non-monster inhabitant.

Watch the foreboding short here or above.

In this additional clip, the Audi lunar quattro detects an alien lifeform in the Convenant’s vehicle bay. Is it friendly or hostile?