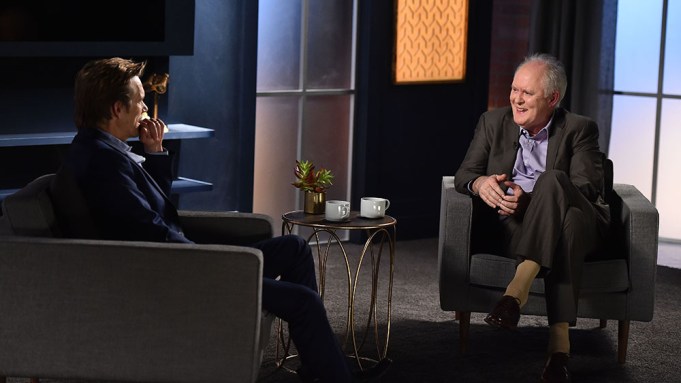 John Lithgow is happy to say he only has one degree of separation from Kevin Bacon.

The two shared the screen in a little movie — cue laughs — that Bacon calls “the F-film.” The movie Bacon is referring to, of course, is the 1984 mega-hit “Footloose.”

In a conversation for Variety’s “Actors on Actors” series, Bacon and Lithgow shared stories from the only time the pair worked on a film together, in a role Bacon calls “life-changing.”

Lithgow’s first memory of working with Bacon was before the two even officially met.

“In my box at that dismal little motel where we all lived, it was a note from you saying what an honor it was to work with me. [It] made me feel very old,” Lithgow said.

Added Lithgow, “You definitely used the word ‘honored,’ which was more than I deserved.”

“It was true,” said Bacon, who admitted he didn’t remember leaving the note. “I wasn’t making it up.”

Bacon was in his 20s during filming, marking a 12-year age difference between him and Lithgow, which was verified in a Google search by Lithgow himself.

“I and Dianne Wiest, who were the preacher and his wife, we felt so old with all these youngsters, and you were the oldest among the youngsters,” Lithgow shared. “We felt like we were the old ‘fuddie duddies.'”

Lithgow didn’t let the age difference between him and the rest of the crew stop him from having fun.

“Somehow, I think in compensation for the fact that we were the conservative older generation, Dianne and I were wild,” Lithgow said. “We had these parties — do you remember the parties? — where we would do soul train and dance.”

This was an experience that Bacon did indeed remember, pointing out that the movie was filmed in the conservative Mormon Country in the ’80s.

One night, Lithgow and Wiest took off their clothes and swam in the pool.

“There was a memo sent out to every member of the production the next morning from Dan Melnick that said, ‘Behave yourselves,'” Lithgow recalled, laughing. “It was directed to Dianne and me.”

Another humorous memory they shared involved the late Chris Penn, who played Willard Hewitt in the film.

“One of the things I loved about Chris was he went out and somehow got a hibachi,” Bacon said. “He would grill, which is just not something you’d expect from a 17-year-old.”

It’s been 33 years since “Footloose” hit theaters, and the two still look back on the film with positive memories.

“It was actually a wonderful experience,” Lithgow said.

Added Bacon, “It was great.”