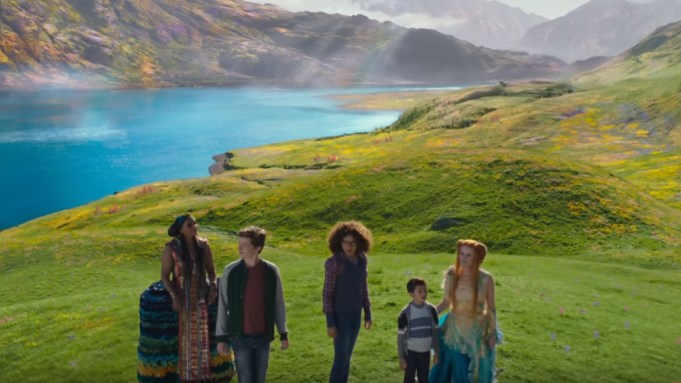 Disney has released a new trailer for the upcoming film adaptation of Madeleine L’Engle’s “A Wrinkle in Time,” as well as four first look photos.

The trailer depicts even more of the strange worlds that Meg Murray (Storm Reid), her younger brother Charles Wallace Murray (Deric McCabe), and school friend Calvin O’Keefe (Levi Miller) enter after Charles Wallance and Meg’s father (Chris Pine) mysteriously disappears. Oprah Winfrey, Mindy Kaling, and Reese Witherspoon also make appearances as Mrs. Which, Mrs. Who, and Mrs. Whatsit. The Mrs. Ws narrate the trailer, explaining that they think the Murrays’ father is still alive, and that it’s up to the children to save him and potentially the world.

“A Wrinkle in Time” is the first book in L’Engle’s “Time Quartet” series that also includes “A Wind in the Door,” “Many Waters” and “A Swiftly Tilting Planet.”

Ava DuVernay is directing the film from an screenplay by Jennifer Lee, who wrote “Frozen.”

Zach Galifianakis as the Happy Medium, who, in the book, shows the children how the universe is being taken over by a dark force.

Meg uses a piece of string to illustrate her father’s conception of space travel, in which a “wrinkle” is created, allowing an ant to move from one of Meg’s hands to the other instantaneously.

Calvin O’Keefe, Charles Wallance, and Meg in one of the more dangerous locations they visit on their journey.

Mrs. Who, Mrs. Which, and Mrs. Whatsit stand in a field.