Robin Wright on ‘House of Cards’: ‘Trump Stole All Our Ideas’ 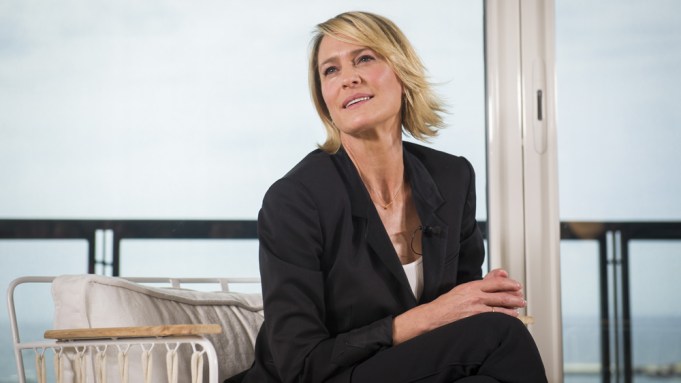 The fifth season of “House of Cards” is already in the can, but Robin Wright says the writers are going to have trouble outdoing the drama unfolding at the White House this week.

“Trump has stolen all of our ideas for season 6,” Wright said Thursday during Variety and Kering’s Women in Motion talk at the Cannes Film Festival.

In the hit Netflix series, Wright plays Claire Underwood, the icy wife of President Frank Underwood. The two are the ultimate power couple, as ruthless as they are brilliant, and not above using their public positions for personal gain. It sounds very reminiscent to a certain Oval Office occupant. Despite the challenge of keeping “House of Cards” relevant in the current political climate, Wright said the producers know how the series is going to end, but she’s not giving any clues.

Wright admitted to feeling disheartened by the wave of scandal surrounding Donald Trump — the president has been dogged by impeachment talk as reports have surfaced that he tried to persuade former FBI director James Comey to drop an investigation into former National Security Advisor Michael Flynn.

“I’ve got to see the hope somewhere,” said Wright, admitting she feels, “Oh my God, we have four years of this.”

But Wright has an idea of who she’d like to see calling the shots at 1600 Pennsylvania Avenue.

“I want Michelle Obama up there,” she said. “She would be a great female president.”

“House of Cards” has earned Wright rave reviews and Emmy nominations, but the actress, who has starred in such hits as “Forrest Gump” and “The Princess Bride,” admits she almost turned down the part. She didn’t want to go back to television after beginning her career on soap operas, and she knew that the character in the British television show that inspired the Netflix series was only a minor part.  However, producer David Fincher and showrunner Beau Willimon prevailed upon her to reconsider, promising that Claire would be the equal of Kevin Spacey’s Francis Underwood.

Her approach is very different than her husband’s. He’s more effusive while she prefers to sit back and wait to strike.

“You realize she’s just as fierce and evil, she just doesn’t have to talk so much,” said Wright. “She’s the best of both sexes.”

On “House of Cards,” Wright was inspired to move behind the camera, directing five episodes. She’s at Cannes with “The Dark of Night,” a short film she directed in the style of a 1930’s film noir. Wright has moved into directing at a time when women are vastly outnumbered by male filmmakers. Women comprised just 7% of all directors working on the 250 highest-grossing domestic releases in 2016, a decline of two percentage points from the level achieved in 2015.

Wright said that the time has come for Hollywood to encourage more perspectives, not just by endorsing more female directors, but by also supporting filmmakers by different ethnicities. Change will come by joining forces and speaking out.

“You don’t have to yell,” said Wright. “You can just stand your ground, speak your truth, and amplify your voice in that way.” Feminism, she said has problematic connotations.

Despite being on a streaming series, Wright is a traditionalist when it comes to big screen entertainment.

‘The movie theater will forever be the first choice, of course,” said Wright. “I think it’s actually rude for people to watch movies on their phones. It’s not fair to the filmmakers.”

Wright will next be seen this summer in “Wonder Woman,” playing the heroine’s aunt. She thinks the comic book blockbuster is offering up something positive for children.

“The message of this movie is not just female empowerment – it’s about love and justice and what a great message to spread to our little ones,” said Wright.

Wright thinks that the situation in Hollywood is improving, but she’s had her own disturbing experiences with sexism and harassment in the movie business. As a 17-year old in Paris, she went in for an audition and was told to lift up her top. When she did, she was told by the man overseeing her appointment, “No, I like the other [actress’] ones, I don’t like.'”